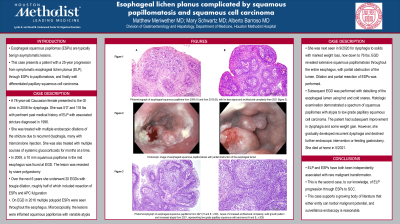 Introduction: Esophageal squamous papillomas (ESPs) are typically benign asymptomatic lesions. The pathogenesis is uncertain but has been associated with acid reflux and other mucosal irritants, as well as with HPV. This case presents a patient with a 25-year progression from symptomatic esophageal lichen planus (ELP), through ESPs to papillomatosis, and finally well differentiated papillary squamous cell carcinoma.

Case Description/Methods: A 78-year old Caucasian female presented to the GI clinic in 2008 for dysphagia. She was 5’0” and 118 lbs with pertinent past medical history of ELP with associated stricture diagnosed in 1996. She was treated with multiple endoscopic dilations of the stricture due to recurrent dysphagia, many with triamcinolone injection. She was also treated with multiple courses of systemic glucocorticoids for months at a time.


In 2009, a 10 mm squamous papilloma in the mid esophagus was found at EGD. The lesion was subsequently partially resected by snare polypectomy and completely ablated using argon plasma coagulation (APC). Over the next 6 years she underwent 20 EGDs with bougie dilation, roughly half of which included resection of ESPs and APC fulguration. On EGD in 2016 multiple polypoid ESPs were seen throughout the esophagus; some but not all lesions were resected. Microscopically, the lesions were inflamed squamous papillomas with variable atypia. The patient then moved out of town and was lost to follow-up.


She was next seen in 9/2020 for dysphagia to solids with marked weight loss, now down to 76 lbs. EGD at that time revealed extensive squamous papillomatosis extending throughout the entire esophagus, with partial obstruction of the lumen. Dilation and partial resection of ESPs was performed. Subsequent EGD was performed with debulking of the esophageal lumen using hot and cold snares. Histologic examination demonstrated a spectrum of squamous papillomas with atypia to low grade papillary squamous cell carinoma. The patient had subsequent improvement in dysphagia and some weight gain. However she gradually developed recurrent dysphagia and declined further endoscopic intervention or feeding gastrostomy. She died at home in 5/2021.

Discussion: ELP and ESPs have both been independently associated with rare malignant transformation. This is the second reported case, to our knowledge, of ELP progression through ESPs to SCC. This case supports a growing body of literature that either entity can harbor malignant potential, and surveillance endoscopy is reasonable. 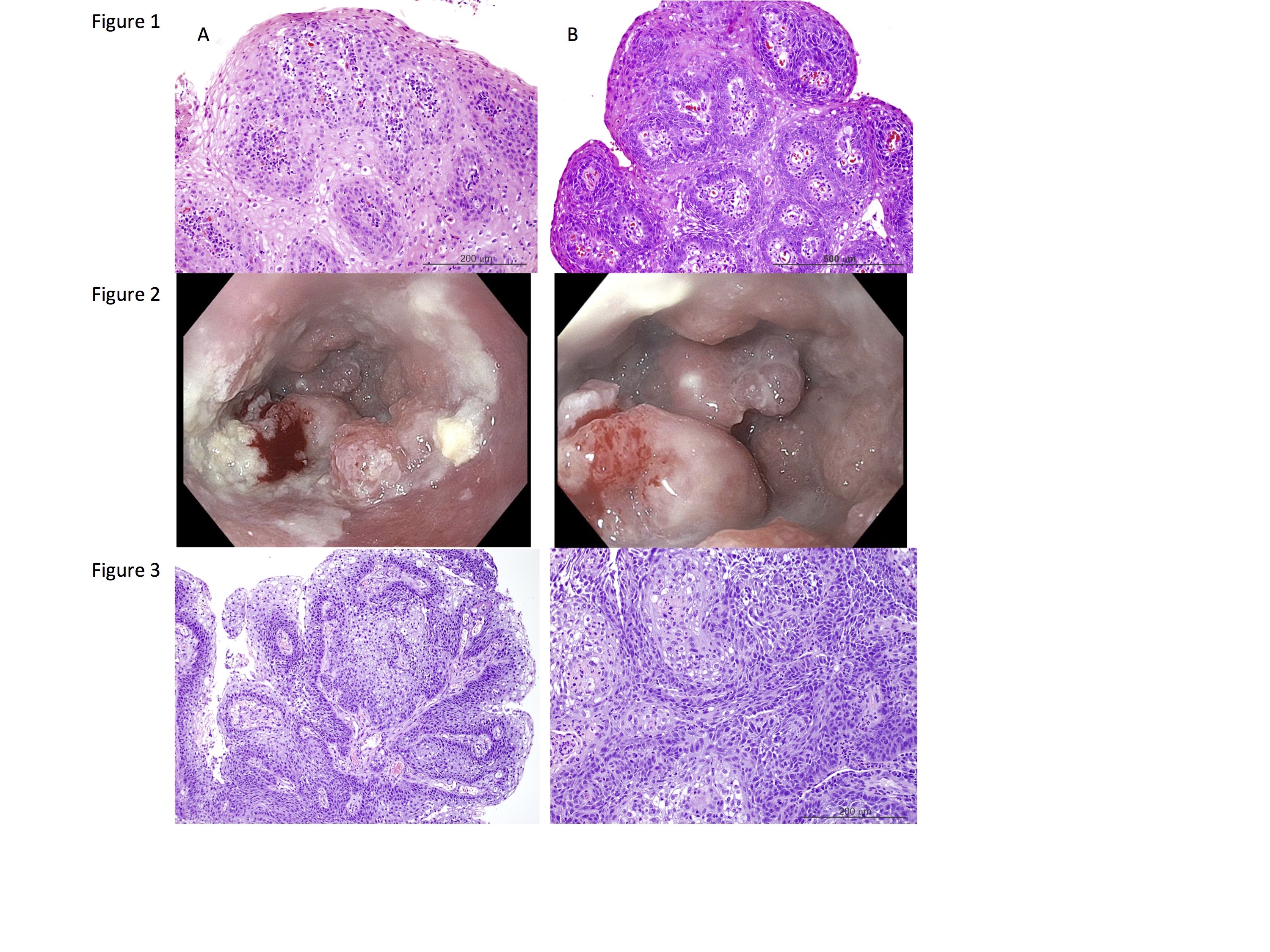