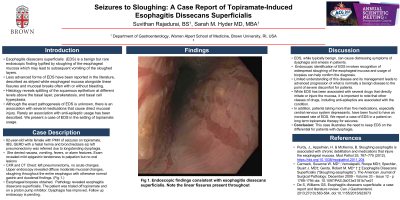 Introduction: Esophagitis dissecans superficialis (EDS) is a benign but rare endoscopic finding typified by sloughing of the esophageal mucosa which may lead to subsequent vomiting of the sloughed layers. However, less advanced forms of EDS have been reported in the literature, described as striped white esophageal mucosa alongside linear fissures and mucosal breaks often with or without bleeding. Histology reveals splitting of the squamous epithelium at different levels above the basal layer, parakeratosis, and basal cell hyperplasia. Although the exact pathogenesis of EDS is unknown, there is an association with several medications that cause direct mucosal injury. Rarely an association with anti-epileptic usage has been described. We present a case of EDS in the setting of topiramate usage.

Discussion: EDS, while typically benign, can cause distressing symptoms of dysphagia and emesis in patients. Endoscopic identification of EDS involves recognition of widespread sloughing of the esophageal mucosa and usage of biopsies can help confirm the diagnosis. Limited understanding of this disease and its management lead to advanced progression of what is normally a fairly benign disease to the point of severe discomfort for patients. While EDS has been associated with several drugs that directly irritate or injure the mucosa, it is important to note that other classes of drugs, including anti-epileptics are associated with the condition. In addition, patients taking more than five medications, especially central nervous system depressants, have been found to have an increased rate of EDS. We report a case of EDS in a patient on long term topiramate therapy for seizures. This case illustrates the need to keep EDS on the differential for patients with dysphagia. 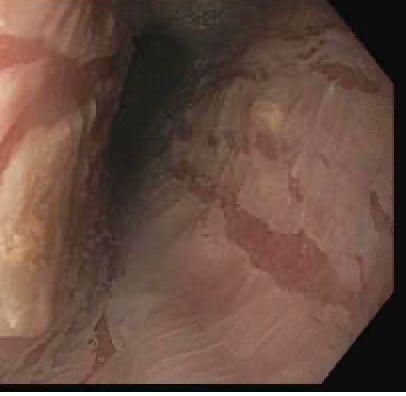