P1415 - Eosinophilic Esophagitis in a Patient With Oral Allergy Syndrome: Is There an Overlap? 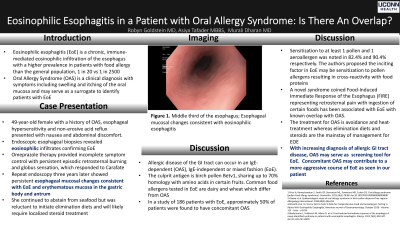 Introduction: Food allergies can trigger systemic manifestations outside of the GI tract, most notably anaphylaxis. Eosinophilic esophagitis (EoE) is a chronic, immune-mediated eosinophilic infiltration of the esophagus with a higher prevalence in patients with food allergy than the general population (1 in 20 vs 1 in 2500). Oral allergy syndrome (OAS) is a clinical diagnosis describing symptoms including swelling and itching of the oral mucosa and may serve as a surrogate to identify patients with EoE.

Discussion: Allergic disease of the GI tract can occur in an IgE-dependent (OAS), IgE-independent or mixed fashion (EoE). The culprit antigen in OAS is birch pollen Betv1, sharing up to 70% homology with amino acids in certain fruits. Food and airborne allergens play a pivotal role in EOE. OAS and EoE both have a strong association with atopic conditions. However, common food allergens tested in EoE are dairy and wheat which differ from OAS. In a study of 186 patients with EoE, approximately 50% of patients were found to have concomitant OAS. Sensitization to at least 1 pollen and 1 aeroallergen was noted in 82.4% and 90.4% respectively. The authors proposed the inciting factor in EoE may be sensitization to pollen allergens resulting in subsequent cross-reactivity with food proteins. A novel syndrome coined Food-Induced immediate Response of the Esophagus (FIRE) representing retrosternal pain with ingestion of certain foods has been associated with EoE with known overlap with OAS. The treatment for OAS is avoidance and heat-treatment whereas elimination diets and steroids form the mainstay of management for EoE. In summary, with increasing diagnosis of allergic GI tract disease, OAS may serve as a screening tool for EoE. Concomitant OAS may contribute to a more aggressive course of EoE as was seen in our patient. 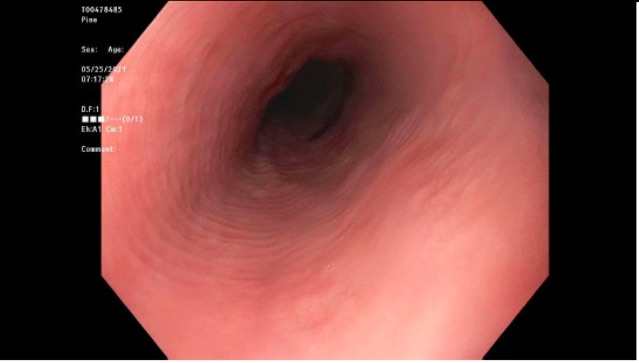