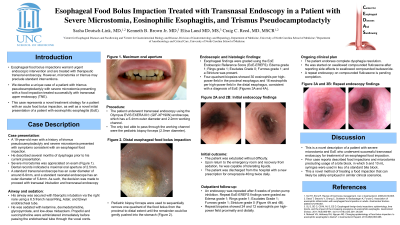 Introduction: Esophageal food bolus impactions warrant urgent endoscopic intervention and are treated with therapeutic transoral endoscopy. However, underlying microstomia or trismus precludes standard interventions. We describe a unique case of a patient with trismus pseudocamptodactyly and severe microstomia presenting with a food bolus impaction treated successfully with transnasal upper endoscopy (TNE). This case represents a novel treatment strategy for a patient with an acute food bolus impaction, as well as a novel initial presentation of an eosinophilic esophagitis (EoE) patient.

Case Description/Methods: A 19 year-old man with a history of trismus pseudocamptodactyly and severe microstomia presented with new onset inability to swallow liquids, solids, and oral secretions 24 hours after consuming chicken. The severity of his microstomia (maximum mouth opening of 2.5mm) prohibited passage of a transoral endoscope and transoral endotracheal tube. We proceeded with an awake transnasal endotracheal intubation followed by TNE using the Olympus EVIS EXERA IIIâ gastroscope, which has a 5.4mm outer diameter and 2.2mm working channel. The transnasal endotracheal intubation was performed without complication. Upon passage of the gastroscope, the esophagus appeared edematous with longitudinal furrows and circumferential rings, consistent with EoE (Figure 1B ). A food bolus impaction was discovered in the distal esophagus (Figure 1A). The only tool able to pass through the working channel was a pediatric biopsy forceps (2.0mm diameter). These biopsy forceps were used to remove one quadrant of the food bolus until the stomach was reached. At this point, the remainder of the food bolus was gently pushed into the stomach (Figure 1C). Biopsies were then taken in four quadrants from the distal and proximal esophagus, which ultimately confirmed EoE.1

Discussion: Prior cases in the medical literature include patients with esophageal food impactions and microstomia precluding usage of a bite block, in which 5mL2 and 10mL3 syringes were used in the place of a bite block to allow for transoral endoscopy. An additional case report discusses the use of TNE to push a food bolus beyond an esophageal tumor.4 To our knowledge, this is the first case of a patient with microstomia and EoE to undergo TNE for treatment of an esophageal food impaction. This method of treating a food bolus impaction can be safely utilized in similar clinical scenarios. 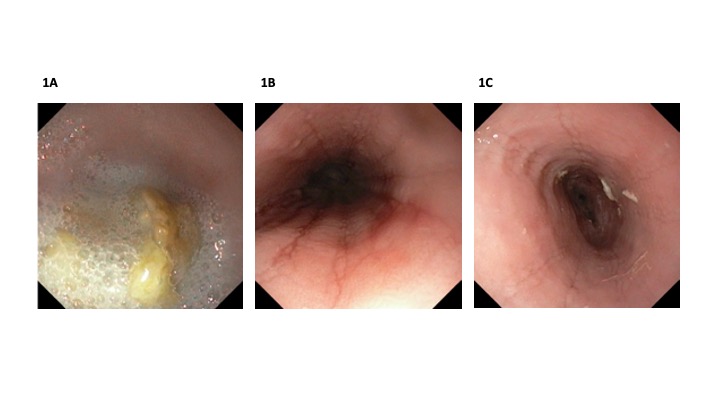