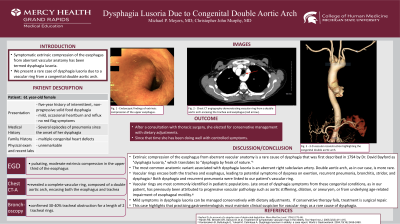 Case Description/Methods: A 61-year-old female presented with a five-year history of intermittent, non-progressive solid food dysphagia. She endorsed mild, occasional heartburn and reflux but had no other red flag symptoms. An EGD was performed which identified pulsating, moderate extrinsic compression in the upper third of the esophagus (Image 1). A chest CT angiography revealed a complete vascular ring, composed of a double aortic arch, encasing both the esophagus and trachea (Image 2,3). At this time, a more complete history revealed several episodes of pneumonia since the onset of her dysphagia. A bronchoscopy confirmed 30-40% tracheal obstruction for a length of 2 tracheal rings. Conservative management led to improvement in her symptoms.

Discussion: Extrinsic compression of the esophagus from aberrant vascular anatomy is a rare cause of dysphagia that was first described in 1794 by Dr. David Bayford as “dysphagia lusoria,” which translates to “dysphagia by freak of nature.”i Vascular rings encase both the trachea and esophagus, leading to potential symptoms of dyspnea on exertion, recurrent pneumonia, bronchitis, stridor, and dysphagia.ii Vascular rings are most commonly identified in pediatric populations. Late onset of dysphagia, as in our patient, has been attributed to progressive vascular pathology and age-related impairment of esophageal motility.iii


Dysphagia lusoria will demonstrate extrinsic compression of the upper esophagus on esophagram or upper endoscopy. The diagnostic test of choice is CT or MR angiography. Mild symptoms can be managed with dietary adjustments. If conservative therapy fails, treatment is surgical repair. This case highlights that gastroenterologists must maintain clinical suspicion for vascular rings as a rare cause of dysphagia. 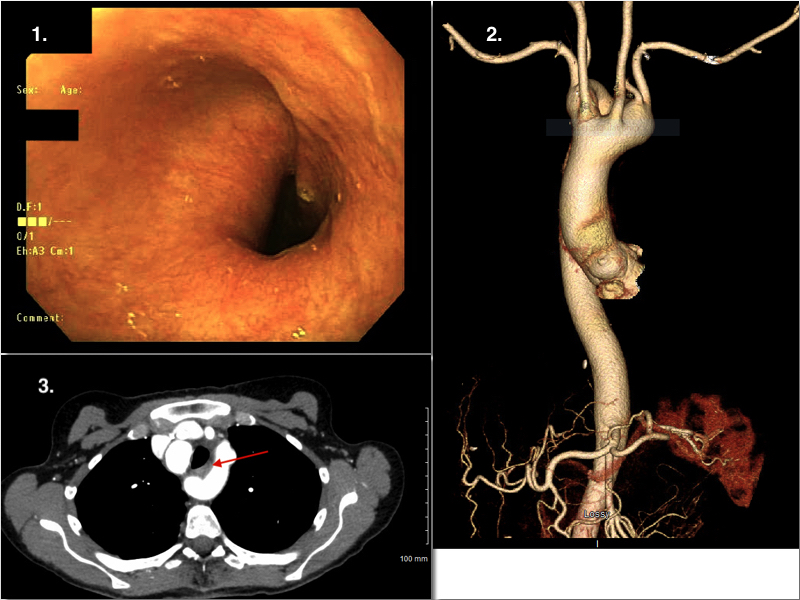