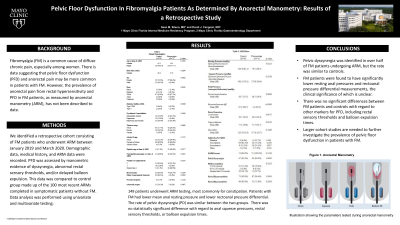 Introduction: Fibromyalgia (FM) is a common cause of diffuse chronic pain, especially among women. There is data suggesting that symptoms of pelvic floor dysfunction (PFD) may be more common in patients with FM. However, the prevalence of PFD in FM patients, as measured by anorectal manometry (ARM), has not been described to date.

Methods: We identified a retrospective cohort population consisting of FM patients who underwent ARM between January 2019 and March 2020. Demographic data, medical history, and ARM data were recorded. PFD was assessed by manometric evidence of dyssynergia, abnormal rectal sensory thresholds, and/or delayed balloon expulsion. This data was compared to a control group made up of the 100 most recent ARMs completed in symptomatic patients without FM. Data analysis was performed using univariate and multivariate testing.