P1449 - Mitochondrial Neuro-Gastro-Intestinal Encephalopathy (MNGIE): When to Expect the Unexpected in a Patient With Unexplained Malnutrition 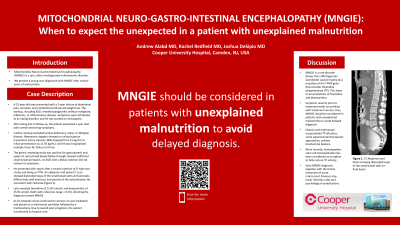 Case Description/Methods: A 22-year-old man presented with a 3-year history of abdominal pain, anorexia, and unintentional 35-pound weight loss. The workup, including EGD, revealed pangastritis without malignant, infections, or inflammatory disease. Symptoms were attributed to an eating disorder, and he was started on mirtazapine. After being lost to follow-up, the patient presented a year later with overall worsening symptoms. Further workup excluded lactase deficiency, celiac, or Whipple disease. Mesenteric doppler showed no celiac/superior mesenteric artery stenosis. BMI dropped from 15 kg/m2 at initial presentation to 11.92 kg/m2, and he was hospitalized multiple times for failure to thrive. The gastric emptying study was positive for gastroparesis and upper GI series/small bowel follow-through showed inefficient small bowel peristalsis. An EGD with a Botox injection did not relieve his symptoms.

He presented with sepsis after a recent insertion of G-tube and J-tube and being on TPN. An abdomen and pelvis CT scan showed distended loops of the small bowel with air-fluid levels, diffuse body wall anasarca, and paucity of the subcutaneous fat consistent with cachexia (Figure 1). Labs revealed thymidine of 15.83 umol/L and deoxyuridine of 25.92 umol/L (both with reference range < 0.25), directing the diagnosis toward MNGIE. As his hospital course continued to worsen, he was intubated and placed on a mechanical ventilator followed by a tracheostomy. Due to overall poor prognosis, the patient transitioned to hospice care.

Discussion: MNGIE is a rare disorder (fewer than 200 diagnoses worldwide) caused mainly by a mutation of the TYMP gene that encodes thymidine phosphorylase (TP). This leads to accumulations of thymidine and deoxyuridine. Symptom severity prior to treatment tends to correlate with treatment success; thus, MNGIE should be considered in patients with unexplained malnutrition to avoid delayed diagnosis.