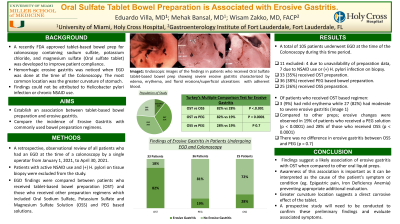 Introduction: A recently approved tablet based bowel prep for the colonoscopy containing sodium sulfate, magnesium sulfate and potassium Chloride (OST) was developed to improve patients compliance. When performing an upper endoscopy (EGD) along with colonoscopy we noticed hemorrhagic erosive gastritis usually in the greater curvature of the stomach with the OST prep that could not be explained by Helicobacter Pylori infection or NSAIDS. This study was performed to evaluate the association of erosive gastritis with the use of OST prep compared with other oral liquid formulations.

Methods: We conducted a retrospective review of all patients who had an EGD at the time of a colonoscopy by a single operator at our Center from January 1, 2021 to April 30. Patients with active NSAID use, and presence of Helicobacter pylori on tissue biopsies were excluded. The EGD findings of those who received OST prep were compared with those who received other preps.

Results: From January 1, 2021 to April 30, 2021, 105 patients underwent EGD at the time of the colonoscopy. Eleven were excluded; 4 due to unavailability of prep data and 7 due to NSAID use or H pylori infection. Of the remaining 94 patients, 33 received OST, 36 a PEG based prep, and 25 sodium sulfate, potassium sulfate and magnesium sulfate solution (OSS). Among the 33 patients who received OST 3 had mild erythema while 27 (82%) had moderate to severe erosive gastritis characterized by adherent blood clots, mucosal edema/congestion, and florid erosions with or without ulcerations mostly over the greater curvature of the gastric body. Erosive changes were also observed in 7 of the 36 patients who received a PEG solution (19%) and 7 of those who received OSS (28%). Analysis of Variance with Tukey’s Multiple Comparisons test demonstrates a significantly higher rate of erosive gastritis for OST compared to OSS (p < 0.0001) and OST compared to PEG (p < 0.0001). There was no difference in erosive gastritis between OSS and PEG (p = 0.71).

Discussion: The findings of this study suggest a likely association of erosive gastritis with OST when compared to oral liquid preps. Endoscopists need to be aware of this association as it can be interpreted as the cause of dyspeptic symptoms or iron deficiency anemia eliminating appropriate additional evaluation. A prospective study will need to be performed to confirm these preliminary findings and evaluate associated symptoms. 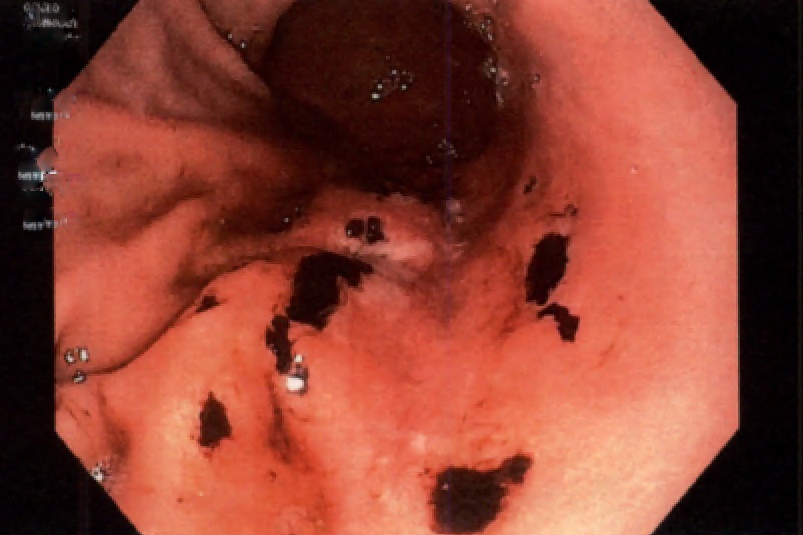 Figure: Erosive Gastritis with Adherent Blood in the Greater Curvature