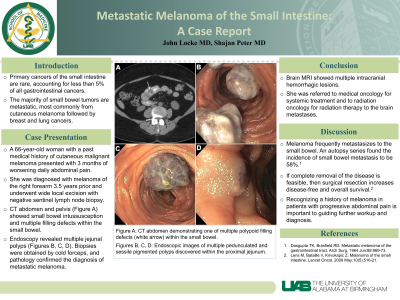 Introduction: Primary cancers of the small intestine are rare, accounting for less than 5% of all gastrointestinal cancers. The majority of small bowel tumors are metastatic, most commonly from cutaneous melanoma followed by breast and lung cancers. We present a case that highlights the importance of maintaining a high index of suspicion for malignancy in patients presenting with progressive abdominal pain who have a previous diagnosis of melanoma.

Case Description/Methods: A 66-year-old woman with a past medical history of cutaneous malignant melanoma presented with 3 months of worsening daily abdominal pain. She had been diagnosed with melanoma of the right forearm 3.5 years prior and underwent wide local excision with negative sentinel lymph node biopsy. CT abdomen and pelvis was obtained for her abdominal pain and showed a long segment of small bowel intussusception with upstream dilation, as well as multiple polypoid filling defects within the small bowel. Small bowel enteroscopy revealed several pedunculated and sessile pigmented polyps throughout the proximal jejunum ranging in size up to 20mm. Biopsies were obtained with cold forceps and sent to pathology. Immunohistochemical staining was performed, and the tumor cells were positive for S100 and Sox10 supporting the diagnosis of metastatic melanoma. Brain MRI was obtained and showed multiple intracranial hemorrhagic lesions. She was referred to medical oncology for systemic treatment and to radiation oncology for radiation therapy to the brain metastases.

Discussion: Malignant melanomas frequently metastasize to the small bowel; an autopsy series found the incidence of small bowel metastasis to be 58%.1 Metastatic melanoma to the small bowel has a variety of presentations ranging from abdominal pain to GI bleed, obstruction, or intussusception. Recognizing a history of melanoma in patients with these presentations is important to guiding further workup and diagnosis. Surgical resection is the recommended treatment for patients in whom complete removal of the disease is feasible. In these cases, resection has been shown to increase disease-free and overall survival. In patients with disseminated and unresectable disease, surgery is not recommended.2 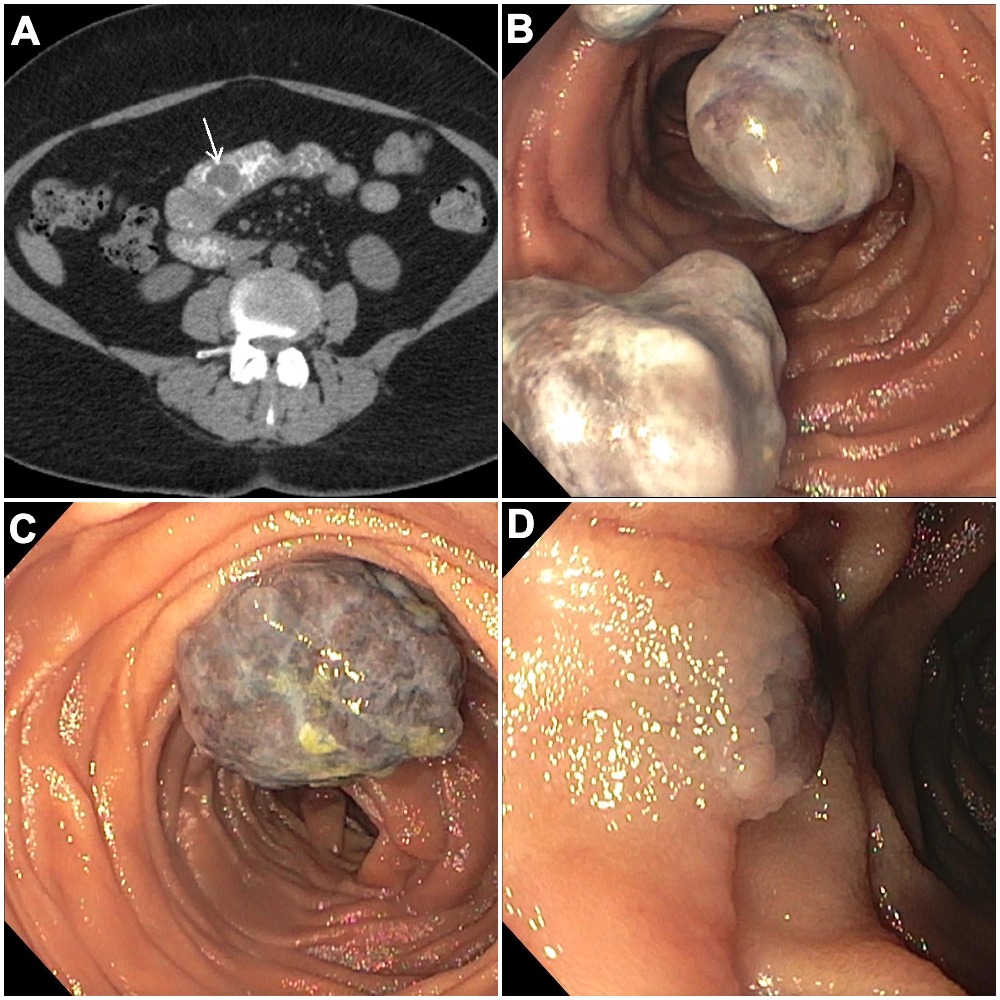 Figure: Figure A: CT abdomen demonstrating one of multiple polypoid filling defects (white arrow) within the small bowel.
Figures B, C, D: Endoscopic images of multiple pedunculated and sessile pigmented polyps discovered within the proximal jejunum. Biopsy was obtained with cold forceps, and pathology confirmed the diagnosis of metastatic melanoma.