P1494 - Enemy at the (Col)Gates: A Case of Repeated Intentional Toothbrush Ingestion 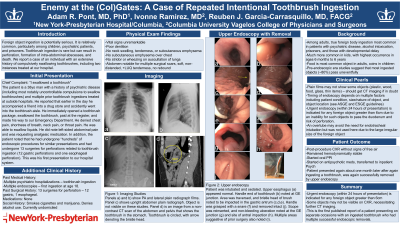 Introduction: Foreign object ingestion is potentially serious. It is relatively common, particularly among children, psychiatric patients, and prisoners. Toothbrush ingestion is rare but can result in perforation, formation of intra-abdominal abscesses, and death. We report a case of an individual with an extensive history of compulsively swallowing toothbrushes, including two instances treated at our hospital.

Case Description/Methods: The patient is a 38 year old man with a history of psychiatric disease and multiple prior toothbrush ingestions with many resultant endoscopies and surgeries. He reported intentionally swallowing a toothbrush earlier in the day. He denied chest pain, shortness of breath, neck pain, throat pain, or difficulty swallowing liquids. He did have left sided abdominal pain. Vital signs were unremarkable. Physical exam was notable only for poor dentition, multiple large, well-healed abdominal incisional scars and some mild left upper quadrant tenderness. CXR was unrevealing, but non-contrast CT abdomen showed a long foreign object in the stomach.

The patient underwent upper endoscopy with general anesthesia. A large plastic toothbrush was observed extending from the GE junction to the antrum where it was impacted. There were no signs of active bleeding or perforation, but we noted extensive altered gastric anatomy from prior surgeries. A polypectomy snare was used for removal and the patient recovered without incident. However, he presented a month later with an almost identical complaint, and again underwent upper endoscopy where a toothbrush was removed from the distal esophagus with a polypectomy snare.

Discussion: We present a case of multiple toothbrush ingestions and endoscopic removals in a single patient. Urgent endoscopy (within 24 hours of presentation) is indicated for any foreign object greater than 6cm due to an inability for such objects to pass the duodenum and risk of perforation. An overtube may avoid the need for endotracheal intubation but was not used here due to the large irregular size of the foreign object. Some objects may not be visible on CXR, necessitating further CT imaging.

Although we lacked previous medical records, the patient’s abdominal scarring and gastric anatomy were consistent with multiple prior gastrostomies. We believe this is the first published report of an individual presenting on multiple separate occasions with an ingested toothbrush and being successfully treated with endoscopic removal. 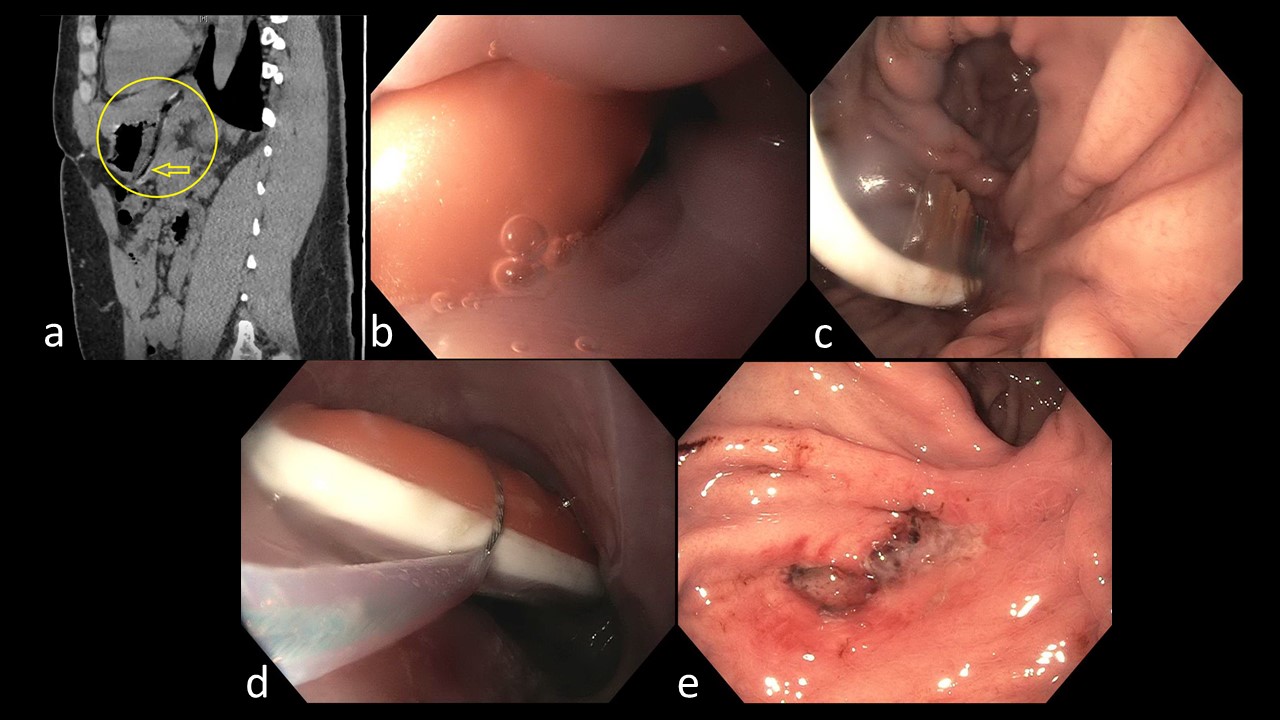 Figure: CT Imaging and Endoscopy Photos from First Procedure: a) Image from non-contrast CT abdomen showing part of the toothbrush in the stomach (circled), arrow denotes bristles b) End of toothbrush handle at the level of GE junction c) Head of toothbrush impacted into gastric antrum d) Retrieval of object using snare e) Area of toothbrush head impaction after extraction.