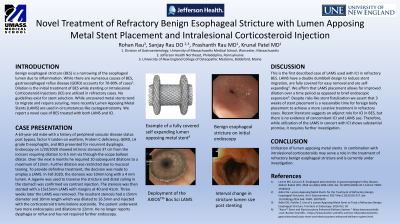 Introduction: Benign esophageal stricture (BES) is a narrowing of the esophageal lumen due to inflammation. While there are numerous causes of BES, gastroesophageal reflux disease (GERD) accounts for 70-80% of cases. Dilation is the initial treatment of BES while stenting or intralesional corticosteroid injections (ICI) are utilized in refractory cases. No guidelines exist for stent selection. While uncovered metal stents tend to migrate and require suturing, more recently Lumen Apposing Metal Stents (LAMS) are used in circumstances like cystogastrostomy. We report a novel case of BES treated with both LAMS and ICI.

Case Description/Methods: A 63-year-old male with a history of peripheral vascular disease status post bypass, factor V Leiden on warfarin, Protein C deficiency, GERD, LA grade D esophagitis, and BES presented for recurrent dysphagia. Endoscopy on 1/20/2020 showed intrinsic stenosis 37 cm from the incisors requiring dilation to 9.5 mm via through-the-scope balloon dilator. Over the next 6 months he required 10 subsequent dilations to a maximum of 12mm. Further dilation was restricted due to mucosal tearing. To provide definitive treatment, the decision was made to employ a LAMS. In Fall 2020, the stenosis was 10mm long with a 4 mm lumen. A Jagwire was used to traverse the stricture and distal coiling in the stomach was confirmed via contrast injection. The stenosis was then stented with a 15x15 LAMS with margins at 40 and 41cm. Three weeks later the LAMS was removed. The resultant stenosis had a 15mm diameter and 10mm length which was dilated to 16.5mm and injected with the corticosteroid triamcinolone acetonide. The patient underwent two more endoscopies and dilations to 12mm. He no longer reports dysphagia or reflux and has not required further endoscopy.

Discussion: This is the first described case of LAMS used with ICI in refractory BES. LAMS have a double dumbbell design to reduce stent migration, are fully covered for easy removal and are self-expanding. We affirm that LAMS placement allows for improved dilation over a time period as opposed to brief endoscopic expansion. Despite risks like stent fistulization we assert that 3 weeks of stent placement is a reasonable time for foreign body placement to achieve a more curative treatment in refractory cases. Recent literature suggests an adjunct role for ICI in BES, but there is no evidence of concomitant ICI and LAMS use. Therefore, while utilization of the LAMS in concert with ICI shows substantial promise, it requires further investigation.