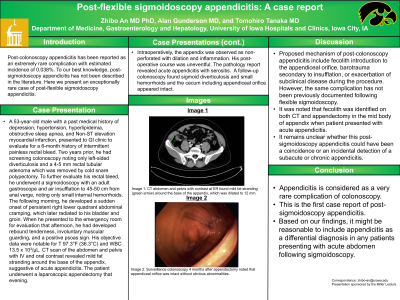 Case Description/Methods: A 53-year-old male with a past medical history of depression, hypertension, hyperlipidemia, obstructive sleep apnea, and Non-ST elevation myocardial infarction, presented to GI clinic to evaluate for a 6-month history of intermittent painless rectal bleed. Two years prior he had screening colonoscopy noting only left-sided diverticulosis and a 4-5 mm rectal tubular adenoma which was removed by cold snare polypectomy. To further evaluate his rectal bleed, he underwent a sigmoidoscopy with an adult gastroscope and air insufflation to 45-50 cm from anal verge, noting only small internal hemorrhoids. The following morning, he developed a sudden onset of persistent right lower quadrant abdominal cramping, which later radiated to his bladder and groin. When he presented to the emergency room for evaluation that afternoon, he had developed rebound tenderness, involuntary muscular guarding, and a positive psoas sign. His objective data were notable for T 97.3°F (36.3°C) and WBC 13.5 x 103/µL. CT scan of the abdomen and pelvis with IV and oral contrast revealed mild fat stranding around the base of the appendix, suggestive of acute appendicitis. The patient underwent a laparoscopic appendectomy that evening. Intraoperatively, the appendix was observed as non-perforated with dilation and inflammation. His post-operative course was uneventful. The pathology report revealed acute appendicitis with serositis. A follow-up colonoscopy found sigmoid diverticulosis and small hemorrhoids and the cecum including appendiceal orifice appeared intact.

Discussion: Proposed mechanism of post‐colonoscopy appendicitis include faecolith introduction to the appendiceal orifice, barotrauma secondary to insufflation, or exacerbation of subclinical disease during the procedure. However, the same complication has not been documented following flexible sigmoidoscopy. Based on our first case report of post-sigmoidoscopy appendicitis, although it is unclear whether this could have been a coincidence or an incidental detection of a subacute or chronic appendicitis, it might be reasonable to include appendicitis as a differential diagnosis in any patients presenting with acute abdomen following sigmoidoscopy.