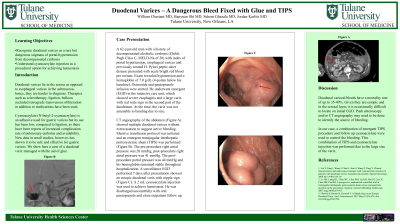 Introduction: Duodenal varices lie in the serosa as opposed to esophageal varices in the submucosa, hence, they are harder to diagnose. Therapies such as sclerotherapy, ligation, balloon occluded retrograde transvenous obliteration in addition to medications have been used.

Cyanoacrylate (N-butyl-2-cyanoacrylate) is an adhesive used for gastric varices but its use has been low, compared to ligation, as there have been reports of increased complication rate of pulmonary embolus and availability. New data in small studies, however, has shown it to be safe and effective for gastric varices. We show here a case of a duodenal varix managed with the aid of glue.

Case Description/Methods: A 62-year-old man with a history of decompensated alcoholic cirrhosis (Childs Pugh Class C, MELD-Na of 20) with index of portal hypertension, esophageal varices and previously treated H. Pylori peptic ulcer disease presented with acute bright red blood per rectum. Exam revealed hypotension and a hemoglobin of 7.0 g/dL (4-points below his baseline). Octreotide and pantoprazole infusion were started. He underwent emergent (EGD) in the intensive care unit, which showed severe esophagitis and a large varix with red wale sign in the second part of the duodenum. At the time, the varix was not amenable to banding due to size.

CT angiography of the abdomen (Figure A) showed multiple duodenal varices without extravasation to suggest active bleeding. Massive transfusion protocol was initiated and an emergent transjugular intrahepatic portosystemic shunt (TIPS) was performed (Figure B). The pre-procedure right atrial pressure was 20 mmHg, post-procedure right atrial pressure was 41 mmHg. The post-procedure portal pressure was 44 mmHg and his hemoglobin remained stable throughout hospitalization. A surveillance EGD performed 7 days after presentation showed an ectopic duodenal varix with nipple sign (Figure C). A 2 mL cyanoacrylate injection was used to achieve hemostasis. He was discharged uneventfully with oral pantoprazole and close outpatient follow up.

Discussion: Duodenal variceal bleeds have a mortality rate of up to 35-40%. Given they are ectopic and in the serosal layer, it is occasionally difficult to locate on initial EGD. Push enteroscopy and/or CT angiography may need to be done to identify the source of bleeding. 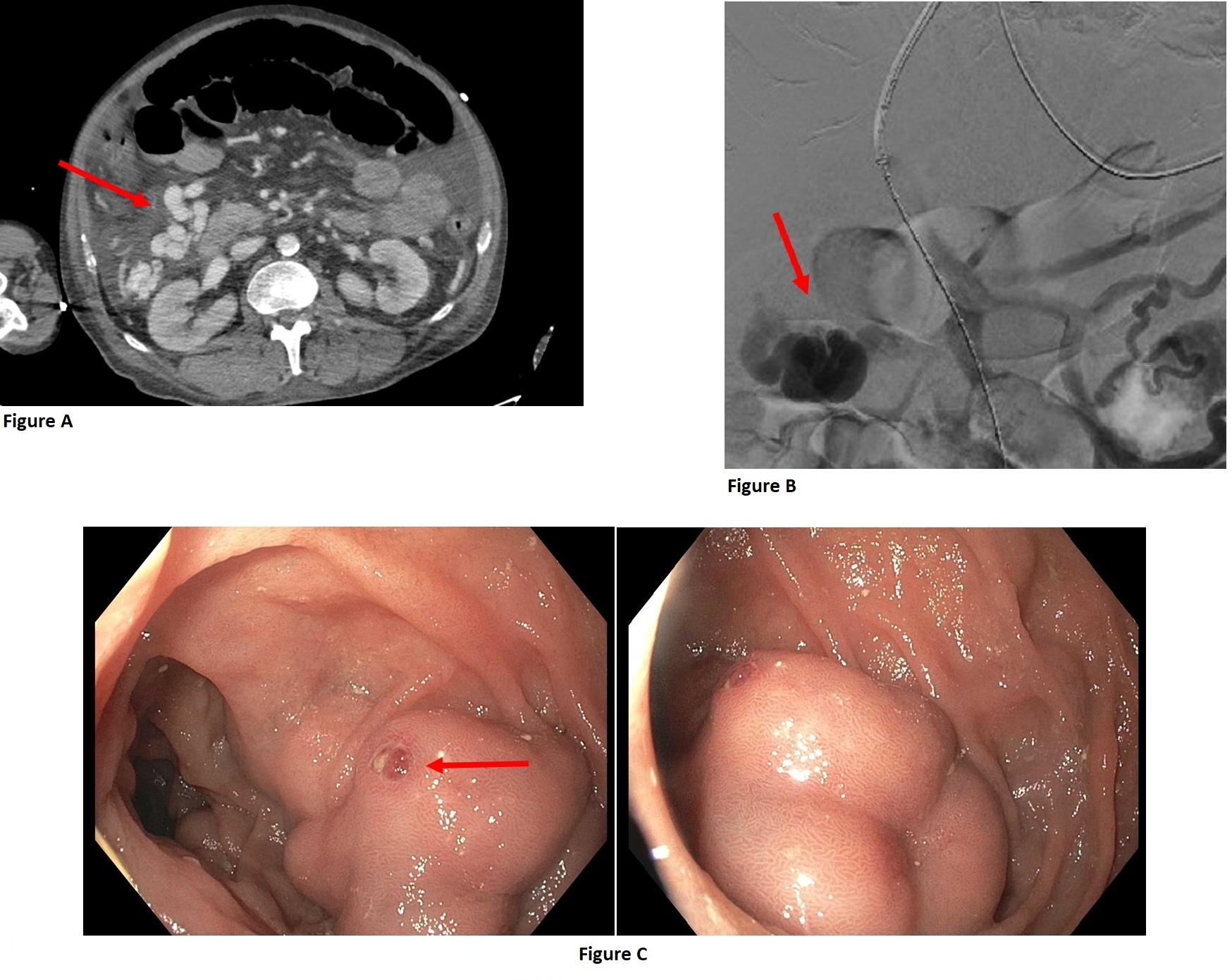