P1538 - Management of Pregnancy in a Patient With Extrahepatic Portal Hypertension Complicated by Gastric Fundal Varices, Splenomegaly and Thrombocytopenia 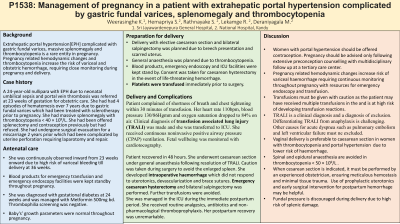 Case Description/Methods: A 24-year-old nullipara with EPH due to neonatal umbilical sepsis and portal vein thrombosis was referred at 23 weeks of gestation for antenatal care. The pregnancy was unplanned. She had experienced 4 episodes of hematemesis due to fundal varices treated with sclerotherapy and blood transfusion prior to pregnancy and massive splenomegaly with thrombocytopenia < 40 × 109/L. She had previously undergone surgical evacuation for a miscarriage complicated by uterine perforation requiring laparotomy and repair. She was admitted and continuously monitored due to high risk of variceal bleeding until delivery at 36 weeks.
Elective caesarean section was planned due to breech presentation and scarred uterus. Platelets were transfused prior to surgery to which she developed transfusion associated acute lung injury (TRALI). She was admitted to intensive care and managed with continuous positive airway pressure for 48 hours. She underwent caesarean section under general anesthesia following the resolution of TRALI. Caution was taken during surgery to avoid the enlarged spleen. She developed major PPH during surgery which did not respond to uterotonics, devascularization and brace sutures. Emergency caesarean hysterectomy was performed. Her recovery was uneventful.

Discussion: Pregnancy related hemodynamic changes increase risk of variceal hemorrhage, requiring monitoring throughout pregnancy with resources for emergency endoscopy and transfusion. Transfusions must be given with caution to patients who have received transfusions in the past due to the risk of transfusion reactions. Vaginal delivery is preferable to caesarean section due to lower risk of PPH and avoidance of spinal anesthesia. When caesarean section is indicated, it must be performed by a senior obstetrician, ensuring meticulous hemostasis and minimal tissue trauma. Use of prophylactic uterotonics and early surgical intervention for PPH may be helpful. Uterine fundal pressure is discouraged during delivery due to risk of splenic damage. Pregnancy complicated by EPH requires preconception counselling and multidisciplinary follow up at a tertiary care center.