P1539 - Kangaroo Feeding Tube Placement in Active Gastrointestinal Bleeding: A Case of What the IRIS Can See 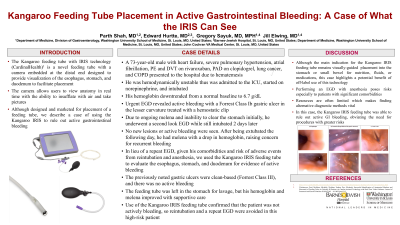 Introduction: The Kangaroo feeding tube with IRIS technology is a novel feeding tube with a camera embedded at the distal end designed to provide visualization of the esophagus, stomach, and duodenum to facilitate placement. The camera allows users to view anatomy in real-time with the ability to insufflate with air and take pictures. Although designed and marketed for placement of a feeding tube, we describe a case of using the Kangaroo IRIS to rule out active gastrointestinal (GI) bleeding.

Case Description/Methods: A 73-year-old male with heart failure, severe pulmonary hypertension, atrial fibrillation, PE and DVT on rivaroxaban, PAD on clopidogrel, lung cancer, and COPD presented to the hospital due to hematemesis. He was hemodynamically unstable thus was admitted to the ICU, started on norepinephrine, and intubated. His hemoglobin downtrended from a normal baseline to 6.7 g/dL. Urgent EGD revealed active bleeding with a Forrest Class Ib gastric ulcer in the lesser curvature treated with a hemostatic clip. Due to ongoing melena and inability to clear the stomach initially, he underwent a second look EGD while still intubated 2 days later. No new lesions or active bleeding were seen. After being extubated the following day, he had melena with a drop in hemoglobin, raising concern for recurrent bleeding. In lieu of a repeat EGD, given his comorbidities and risk of adverse events from reintubation and anesthesia, we used the Kangaroo IRIS feeding tube to evaluate the esophagus, stomach, and duodenum for evidence of active bleeding. The previously noted gastric ulcers were clean-based (Forrest Class III), and there was no active bleeding. The feeding tube was left in the stomach for lavage, but his hemoglobin and melena improved with supportive care. Use of the Kangaroo IRIS feeding tube confirmed that the patient was not actively bleeding, so reintubation and a repeat EGD were avoided in this high-risk patient.

Discussion: Although the main indication for the Kangaroo IRIS feeding tube remains visually-guided placement into the stomach or small bowel for nutrition, fluids, or medications, this case highlights a potential benefit of off-label use of this technology. Performing an EGD with anesthesia poses risks especially to patients with significant comorbidities. Additionally, resources are often limited which makes finding alternative diagnostic methods vital. In this case, the Kangaroo IRIS feeding tube was able to rule out active GI bleeding, obviating the need for procedures with greater risks.