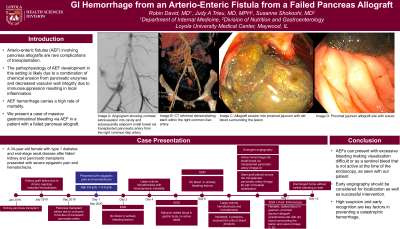 Introduction: Arterio-enteric fistulas (AEF) involving pancreas allografts are rare complications after transplantation. Although the pathophysiology is unclear, it is proposed that is it due to a combination of chemical erosion from pancreatic enzymes and decreased vascular wall integrity due to immunosuppression resulting in local inflammation. AEF hemorrhage among this patient population carries a high rate of mortality. We present a case of massive gastrointestinal bleeding via AEF in a patient with a failed pancreas allograft.

Case Description/Methods: A 34-year-old female with type 1 diabetes and end-stage renal disease after failed kidney and pancreatic transplants four years prior due to recurrent venous thromboemboli, on anticoagulation, presented with hematochezia. She was hypotensive and had a hemoglobin of 6.8g/dL. On EGD, there was no clear etiology as no blood was seen. While planning for a colonoscopy, she suddenly had four large melanic bowel movements and subsequently became hypotensive and unresponsive. She was found to have a 3-gram drop in hemoglobin. An emergent EGD showed massive clotted blood in the gastric body (Figure 1A) that was unsuccessfully removed but no active bleeding was identified. The following day, a repeat EGD was performed with adequate visualization of the stomach revealing no obvious source for bleeding. Shortly thereafter, she developed massive hematochezia and hematemesis requiring 4 vasopressors and 65 units of blood products. She was intubated for airway protection and was taken for an emergent arterial angiography which demonstrated active hemorrhage into the small bowel via her transplanted pancreatic artery that had been anastomosed to the right common iliac artery (Figure 1B). A stent graft was placed across the transplant pancreatic artery (Figure 1C) and patient immediately stabilized. She was discharged home the following week without any further bleeding to date.

Discussion: AEF formation after chronic pancreatic graft failure is rare and only reported in a limited number of case reports. AEFs can present with excessive bleeding making visualization difficult or as a sentinel bleed that is not active at the time of the endoscopy, as seen with our patient. Early angiography should be considered for localization as well as successful intervention. In reported cases of persistent or recurrent bleeding, surgical resection of the pancreas allograft is performed. High suspicion and early recognition are key factors in preventing a later catastrophic hemorrhage.

Figure: 1A: Massive clotted blood seen occupying the majority of the body of the stomach