P1543 - I Can’t See Anything Down Here: A Case of Diffuse Dasatinib-Induced Enteral Bleeding 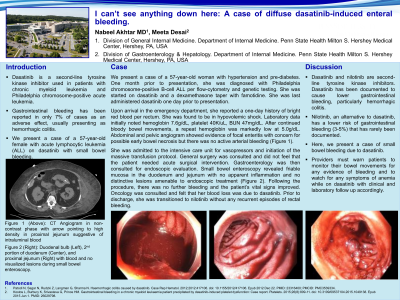 Introduction: Dasatinib is a second-line tyrosine kinase inhibitor used in patients with chronic myeloid leukemia and Philadelphia chromosome-positive acute leukemia. Gastrointestinal bleeding has been reported in only 7% of cases as an adverse effect, usually presenting as hemorrhagic colitis. We present a case of a 57-year-old female with acute lymphocytic leukemia (ALL) on dasatinib with small bowel bleeding.

Case Description/Methods: We present a case of a 57-year-old woman with hypertension and pre-diabetes. One month prior to presentation, she was diagnosed with Philadelphia chromosome-positive B-cell ALL per flow-cytometry and genetic testing. She was started on dasatinib and a dexamethasone taper with famotidine. She was last administered dasatinib one day prior to presentation. Upon arrival in the emergency department, she reported a one-day history of bright red blood per rectum. She was found to be in hypovolemic shock. Laboratory data initially noted hemoglobin 7.6g/dL, platelet 40K/uL, BUN 47mg/dL. After continued bloody bowel movements, a repeat hemoglobin was markedly low at 5.0g/dL. Abdominal CT showed evidence of focal enteritis with concern for possible early bowel necrosis but there was no active arterial bleeding. She was admitted to the intensive care unit for vasopressors and initiation of the massive transfusion protocol. General surgery was consulted and did not feel that the patient needed acute surgical intervention. Gastroenterology was then consulted for endoscopic evaluation. Small bowel enteroscopy revealed friable mucosa in the duodenum and jejunum with no apparent inflammation and no distinctive lesions amenable to endoscopic treatment. Following the procedure, there was no further bleeding and the patient’s vital signs improved. Oncology was consulted and felt that her blood loss was due to dasatinib. Prior to discharge, she was transitioned to nilotinib without any recurrent episodes of rectal bleeding.

Discussion: Dasatinib and nilotinib are second-line tyrosine kinase inhibitors. Dasatinib has been documented to cause lower gastrointestinal bleeding, particularly hemorrhagic colitis. Nilotinib, an alternative to dasatinib, has a lower risk of gastrointestinal bleeding (3-5%) that has rarely been documented. Here, we present a case of small bowel bleeding due to dasatinib. Providers must warn patients to monitor their bowel movements for any evidence of bleeding and to watch for any symptoms of anemia while on dasatinib with clinical and laboratory follow up accordingly.