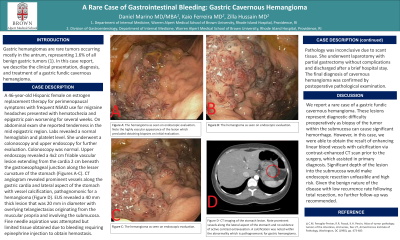 Introduction: Gastric hemangiomas are rare tumors occurring mostly in the antrum, representing 1.7% of all gastric benign tumors. In this case report, we describe the clinical presentation, diagnosis, and treatment of a gastric fundic cavernous hemangioma.

Case Description/Methods: A 46-year-old Hispanic female on estrogen replacement therapy for perimenopausal symptoms with frequent NSAID use for migraine headaches presented with hematochezia and epigastric pain worsening for several weeks. On abdominal examination she reported tenderness in the mid epigastric region. Labs revealed a normal hemoglobin and platelet level. She underwent a colonoscopy and upper endoscopy for further evaluation. Colonoscopy was normal. Upper endoscopy revealed a 4x2 cm friable vascular lesion extending from the cardia 2 cm beneath the gastroesophageal junction along the lesser curvature of the stomach (Figures A-C). CT angiogram revealed prominent vessels along the gastric cardia and lateral aspect of the stomach with vessel calcification, pathognomonic for a hemangioma (Figure D). EUS revealed a 40 mm thick lesion that was 20 mm in diameter with overlying telangiectasias originating from the muscular propria and involving the submucosa. Fine needle aspiration was attempted but limited tissue obtained due to bleeding requiring 1:10000 epinephrine injection to obtain hemostasis. Pathology was inconclusive due to scant tissue. She underwent laparotomy with partial gastrectomy without complications and discharged after 5 day hospital stay. The final diagnosis of cavernous hemangioma was confirmed by postoperative pathological examination.

Discussion: In conclusion, we report a rare case of a gastric fundic cavernous hemangioma. These lesions represent diagnostic difficulties preoperatively as biopsy of the tumor within the submucosa can cause worsening hemorrhage. However, in this case, we were able to obtain the result with enhancing linear blood vessels with calcification by contrast-enhanced CT scan prior to the surgery, which assisted in primary diagnosis. Significant depth of the lesion into the submucosa would make endoscopic resection unfeasible and high risk. Given the benign nature of the disease with low recurrence rate following total resection, no further follow-up was recommended

Figure: Figures A-C- The hemangioma as seen on endoscopic evaluation. Note the highly vascular appearance of the lesion which precluded obtaining biopsies on initial evaluation. Figure D- CT imaging of the stomach lesion. Note prominent vessels along the lateral aspect of the stomach and no evidence of active contrast extravasation. A calcification was noted within the abnormality which is pathognomonic for gastric hemangioma.