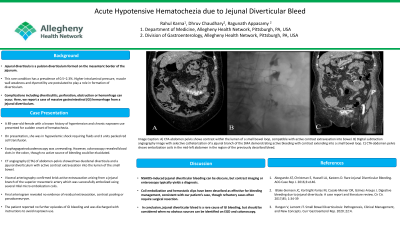 Introduction: Diverticulosis is an uncommon pathology of the small intestines. Complications including diverticulitis, perforation, obstruction, or hemorrhage can occur. Here, we report a case of massive gastrointestinal (GI) hemorrhage from a jejunal diverticulum.

Case Description/Methods: An 89-year-old female with known history of hypertension and chronic naproxen use presented for sudden onset of hematochezia. On presentation, she was in hypovolemic shock requiring fluids and 3 units packed red cell transfusion.

Esophagogastroduodenoscopy was unrevealing. However, colonoscopy revealed blood clots in the colon, though no active source of bleeding could be elucidated. CT angiography (CTA) of abdomen-pelvis showed two duodenal diverticula and a jejunal diverticulum with active contrast extravasation into the lumen of the small bowel. Visceral arteriography confirmed brisk active extravasation arising from a jejunal branch of the superior mesenteric artery which was successfully embolized using several Hilal micro embolization coils. Final arteriogram revealed no evidence of residual extravasation, contrast pooling or pseudoaneurysm. The patient reported no further episodes of GI bleeding and was discharged with instructions to avoid naproxen use.

Discussion: Jejunal diverticula is a pulsion diverticulum formed on the mesenteric border of the jejunum. This rare condition has a prevalence of 0.5–2.3%. Higher intraluminal pressure, muscle wall weakness and dysmotility are postulated to play a role in formation of diverticulum. Most patients are asymptomatic and diagnosed incidentally based on imaging or surgical specimen resection. However, patients can also present with complications. NSAIDS-induced jejunal diverticular bleeding can be obscure, but contrast imaging or enteroscopy typically yields a diagnosis. In the present case, CTA-AP showed two duodenal diverticula and a jejunal diverticulum with active intravenous contrast extravasation into the lumen of the small bowel. Coil embolization and hemostatic clips have been described as effective for bleeding management, consistent with our patient’s case, though refractory cases often require surgical resection. In conclusion, jejunal diverticular bleed is a rare cause of GI bleeding, but should be considered when no obvious sources can be identified on EGD and colonoscopy.

Figure: CTA-abdomen pelvis shows contrast within the lumen of a small bowel loop, compatible with active contrast extravasation into bowel. B) Digital subtraction angiography image with selective catheterization of a jejunal branch of the SMA demonstrating active bleeding with contrast extending into a small bowel loop. C) CTA-abdomen pelvis shows embolization coils in the mid-left abdomen in the region of the previously described bleed.