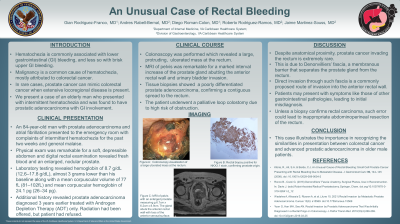 Introduction: Hematochezia is commonly associated with lower gastrointestinal (GI) bleeding, and less so with brisk upper GI bleeding. Malignant lesions are a known cause of gastrointestinal blood loss, but malignancy-associated GI bleeding is mostly caused by colorectal cancer. In rare cases, prostate cancer can mimic gastrointestinal cancer when extensive locoregional disease is present.

Case Description/Methods: An 84-year-old man presented to the ER with complaints of intermittent hematochezia for the past two weeks. Associated symptoms included general malaise and dyspnea on exertion which began three weeks prior to arrival. On examination he has a soft, depressible abdomen and rectal exam is significant for an enlarged prostate and bright red blood per rectum. Laboratories exhibited a hemoglobin level of 8.7g/dL, almost 3 grams lower than his baseline. Chemistry panel was unremarkable. A clinical diagnosis of gastrointestinal hemorrhage was made. The GI service was consulted, and a colonoscopy was performed which revealed a large ulcerated mass at the rectum. No other bleeding stigmata was found. Tissue biopsies were consistent with a poorly differentiated prostate adenocarcinoma, likely representing a contiguous spread to the rectum. MRI of pelvis was remarkable for a marked interval increase of prostate gland since prior studies abutting the anterior rectal wall. Additional history revealed castration-resistant prostate adenocarcinoma diagnosed 3 years earlier, treated with medical therapy leuprolide and bicalutamide. Radiation had been offered multiple times since diagnosis, but patient had refused. Hematochezia persisted and at this point, he agreed with radiotherapy. Due to the high likelihood that radiation could cause fistula formation or perforation, a diverting loop colostomy was performed before beginning therapy. Hematochezia has resolved since. Figure: A: Colonoscopic visualization of a large ulcerated mass at the rectum. B: MRI of pelvis with an enlarged prostate measuring 6.7cm x 6.2cm x 8.9cm. The gland abuts the anterior rectal wall with loss of the anterior serosal surface.