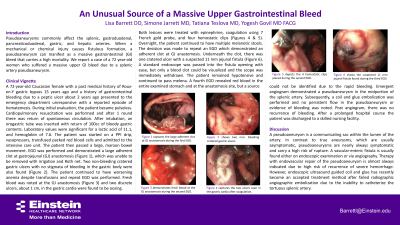 Case Description/Methods: A 72-year-old female with a history of Roux-en-Y gastric bypass presented to the emergency department with an episode of hematemesis. During initial evaluation, the patient was unresponsive and pulseless. An orogastric tube returned 100 cc of bloody gastric contents. The patient was started on PPI drip, vasopressors, packed red blood cells transfusion and admitted to intensive care unit. The patient continued to pass large, maroon bowel movements. EGD demonstrated a large adherent clot at gastrojejunal (GJ) anastomosis, and two non-bleeding cratered gastric ulcers with no stigmata of bleeding in the gastric pouch. Repeat EGD for worsening anemia despite transfusions showed fresh blood at the GJ anastomosis and two discrete oozing ulcers, each about 1cm in the gastric pouch. Both lesions were treated with endoscopic therapy. However, the patient continued to have melanotic stools. Third EGD demonstrated an adherent clot at GJ anastomosis. Underneath the clot, was a cratered ulcer with a fistulous tract. Endoscope passed into the fistulous opening with ease, but only a blood clot could be visualized and the scope was withdrawn. The patient remained hypotensive and continued to pass melena. Fourth EGD revealed fresh blood in the entire examined stomach and at the anastomosis site. A source of rapid bleeding could not be identified. Emergent angiogram demonstrated a pseudoaneurysm in the midportion of the splenic artery. A coil and glue embolization of the splenic artery was performed. Post angiogram, there was no recurrence of GI bleeding. After a prolonged hospital course, the patient was discharged to a skilled nursing facility.

Discussion: A pseudoaneurysm is a communicating sac within the lumen of the artery. In contrast to true aneurysms, which are usually asymptomatic, pseudoaneurysms are nearly always symptomatic and carry a high risk of rupture. A vascular-enteric fistula is usually found either on endoscopic examination or via angiography. Therapy with angiographic embolization of the pseudoaneurysm is almost always indicated due to high risk of recurrence of severe hemorrhage. If access to the splenic artery fails, endoscopic ultrasound guided coil and glue has recently become an accepted treatment method. 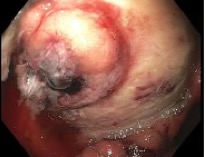 Figure: A suspected 11 mm jejunal fistula found in the ulcerated GJ site through which the endoscope was passed, but only blood clot could be visualized.