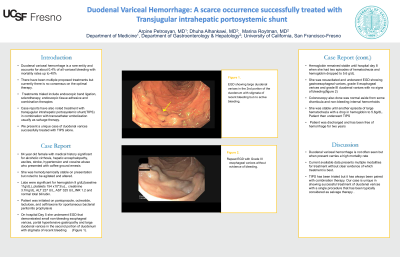 Introduction: Duodenal variceal hemorrhage is a rare entity and accounts for about 0.4% of all variceal bleeding with mortality rates up to 40%. There have been multiple proposed treatments but currently there is no consensus on the optimal therapy. Treatments trialed include endoscopic band ligation, sclerotherapy, endoscopic tissue adhesive and combination therapies. Case reports have also noted treatment with transjugular intrahepatic portosystemic shunt(TIPS) in combination with transcatheter embolization usually as salvage therapy. We present a unique case of duodenal varices successfully treated with TIPS alone.

Case Description/Methods: Our patient is a 64 year old female with medical history significant for alcoholic cirrhosis, hepatic encephalopathy, ascites, stroke, hypertension and cocaine abuse who presented with coffee ground emesis. She was hemodynamically stable on presentation but noted to be agitated and altered. Labs were significant for hemoglobin 9 g/dL(baseline 11g/dL), platelets 154 x10*3/uL , creatinine 3.7mg/dL, ALT 227 U/L, AST 325 U/L,INR 1.2 and normal total bilirubin. Patient was initiated on pantoprazole, octreotide, lactulose, and ceftriaxone for spontaneous bacterial peritonitis prophylaxis. Once mentation improved, the patient underwent EGD on hospital day 5. The EGD demonstrated small non-bleeding esophageal varices, portal hypertensive gastropathy and large duodenal varices in the second portion of duodenum with stigmata of recent bleeding. Hemoglobin remained until hospital day 8 when she had two episodes of hematochezia with hemoglobin dropped to 5.6 g/dL. Patient was resuscitated and underwent EGD showing gastroesophageal varices, grade II esophageal varices and grade III duodenal varices with no signs of bleeding. She also underwent colonoscopy which was normal aside from some diverticula and non-bleeding internal hemorrhoids. She was stable until another episode of large hematochezia with a drop in hemoglobin to 5.6g/dL.Patient then underwent TIPS. Patient was discharged and has been free of hemorrhage for two years.

Discussion: Duodenal variceal hemorrhage is not often seen but when present carries a high mortality rate . Current available data presents multiple modalities for treatment without clear evidence of which treatment is best. TIPS has been trialed but it is always been paired with combination therapy. Our case is unique in showing successful treatment of duodenal varices with a single procedure that has been typically considered as salvage therapy. 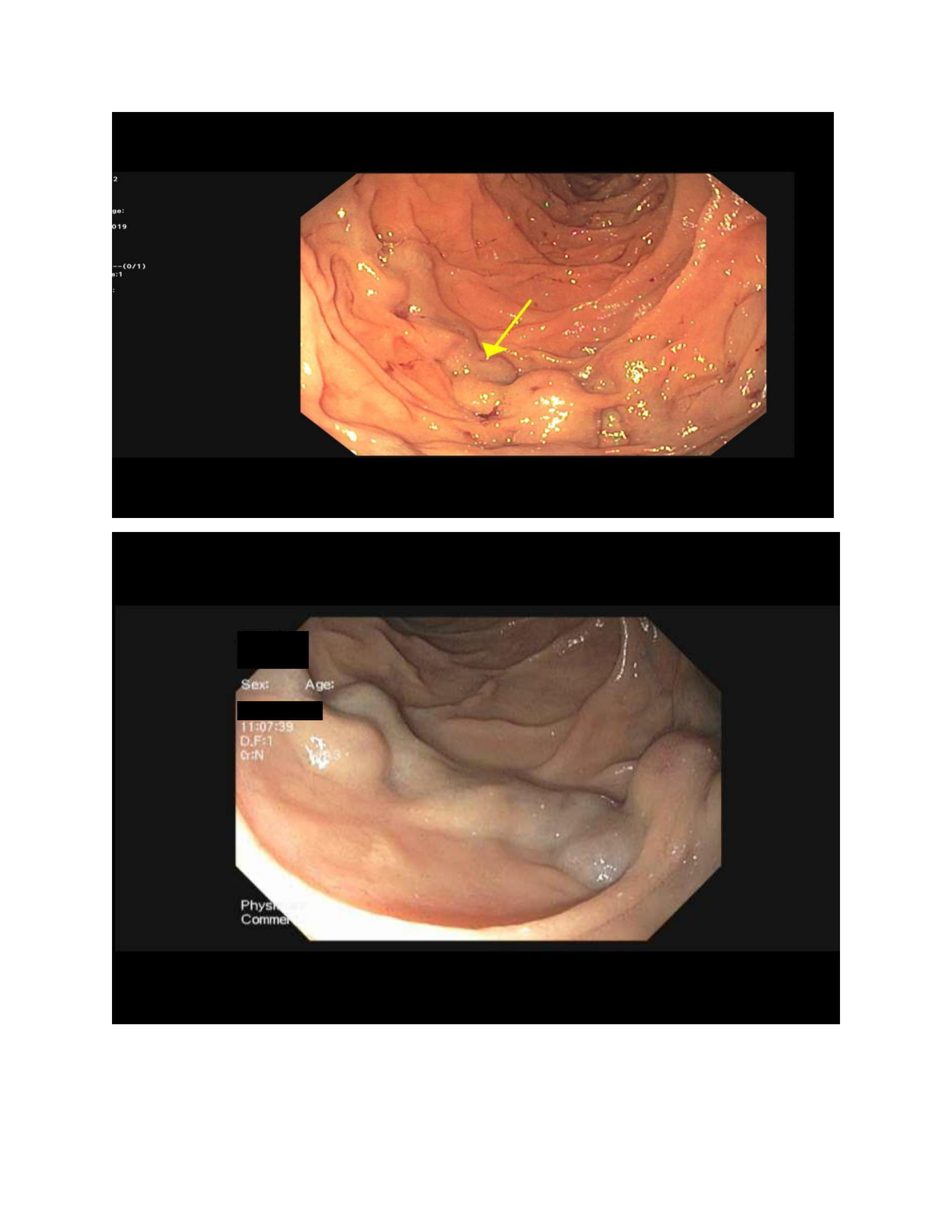 Figure: Figure 1. EGD showing large duodenal varices in the 2nd portion of the duodenum with stigmata of recent bleeding but no active bleeding.
Figure 2. Repeat EGD with Grade III esophageal varices without evidence of bleeding.