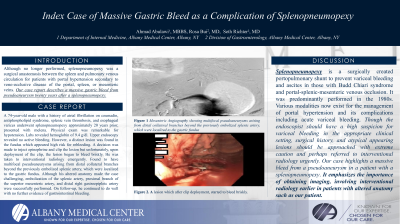 Introduction: Although no longer performed, splenopneumopexy was a surgical anastomosis between the spleen and pulmonary venous circulation for patients with portal hypertension secondary to veno-occlusive disease of the portal, spleen, or mesenteric veins. The creation of this portopulmonary shunt was to prevent mortality from variceal bleeding that is often seen in cirrhosis from portal hypertension. Our case report describes a massive gastric bleed from pseudoaneurysm twenty years after a splenopneumopexy.

Case Description/Methods: A 74-year-old male with a history of atrial fibrillation on coumadin, antiphospholipid syndrome, splenic vein thrombosis, and esophageal varices underwent splenopneumopexy approximately 20 years prior, presented with melena. Physical exam was remarkable for hypotension. Labs revealed hemoglobin of 9.4 g/dl. Upper endoscopy revealed no active bleeding. However, a distinct lesion was found in the fundus which appeared high risk for rebleeding. A decision was made to inject epinephrine and clip the lesion but unfortunately, upon deployment of the clip, the lesion began to bleed briskly. He was taken to interventional radiology emergently. Found to have multifocal pseudoaneurysms arising from distal collateral branches beyond the previously embolized splenic artery, which were localized to the gastric fundus. Although his altered anatomy made the case challenging, embolization of the splenic artery, proximal branch of the superior mesenteric artery, and distal right gastroepiploic artery were successfully performed. On follow-up, he continued to do well with no further evidence of gastrointestinal bleeding.

Discussion: Splenopneumopexy is a surgically created portopulmonary shunt to prevent variceal bleeding and ascites in those with Budd Chiari syndrome and portal-splenic-mesenteric venous occlusion. It was predominantly performed in the 1980s. Various modalities now exist for the management of portal hypertension and its complications including acute variceal bleeding. Though the endoscopist should have a high suspicion for variceal bleeding in the appropriate clinical setting, surgical history, and atypical appearing lesions should be approached with extreme caution and perhaps referred to interventional radiology urgently. Our case highlights a massive bleed from a pseudoaneurysm in a patient with a splenopneumopexy. It emphasizes the importance of obtaining imaging, involving interventional radiology earlier in patients with altered anatomy such as our patient. 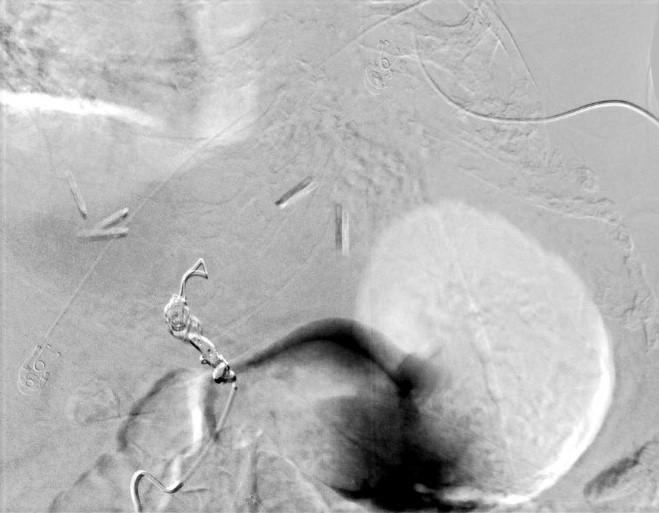