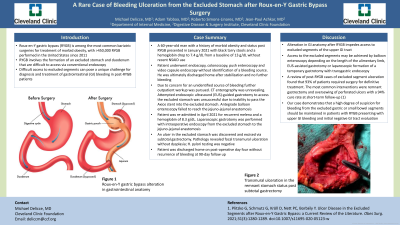 Introduction: Roux-en-Y gastric bypass (RYGB) is among the most common bariatric surgeries for treatment of morbid obesity, with >450,000 RYGB performed in the United States since 2011. Formation of an excluded stomach and duodenum that are difficult to access via conventional endoscopy can pose a unique challenge for diagnosis and treatment of gastrointestinal (GI) bleeding in post-RYGB patients.

Case Description/Methods: A 60-year-old man with a history of morbid obesity and status post RYGB in 2017 presented in January 2021 with black tarry stools and a hemoglobin of 7.4 from a baseline of 13 g/dL without recent NSAID or tobacco use. He underwent upper endoscopy, colonoscopy, push enteroscopy and video capsule endoscopy without identification of a bleeding source. He was ultimately discharged home after stabilization and no further bleeding.

Due to concern for an unidentified source of bleeding, further outpatient workup was pursued. CT enterography was unrevealing. Attempted endoscopic ultrasound (EUS)-guided gastrotomy to access the excluded stomach was unsuccessful due to inability to pass an Axios stent into the excluded stomach. Antegrade balloon enteroscopy failed to reach the jejuno-jejunal anastomosis.

The patient was re-admitted in April 2021 for recurrent melena and a hemoglobin of 8.3 g/dL. Laparoscopic gastrotomy was performed with intraoperative transgastric endoscopy which revealed blood in the excluded stomach and duodenum. An ulcer in the excluded stomach was discovered and excised via subtotal gastrectomy. Pathology revealed focal transmural ulceration without dysplasia; H. pylori testing was negative. The patient was discharged home without recurrence of bleeding.

Discussion: Alteration in GI anatomy after RYGB impedes access to excluded segments of the upper GI tract. Access to the excluded segments may be achieved by balloon enteroscopy depending on the length of the alimentary limb, EUS-assisted gastrotomy or laparoscopic formation of a temporary gastrotomy with transgastric endoscopy. A review of post-RYGB cases of excluded segment ulceration found that 93% of patients required surgery for definitive treatment. The most common interventions were remnant gastrectomy and oversewing of perforated ulcers with a 94% cure rate at short-term follow-up. Our case demonstrates that a high degree of suspicion for bleeding from the excluded gastric or small bowel segments should be maintained in patients with RYGB presenting with upper GI bleeding and initial negative GI tract evaluation. 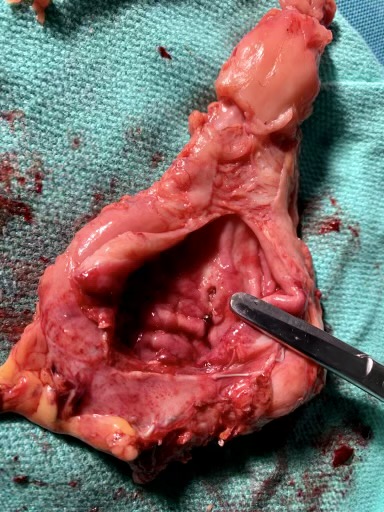