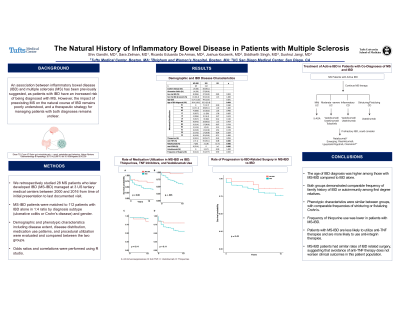 Introduction: An association between inflammatory bowel disease (IBD) and multiple sclerosis (MS) has been previously suggested, as patients with IBD have an increased risk of being diagnosed with MS. However, the impact of preexisting MS on the natural course of IBD remains poorly understood, and a therapeutic strategy for managing patients with both diagnoses remains unclear.

Methods: We retrospectively studied 28 MS patients who later developed IBD (MS-IBD) managed at 3 US tertiary medical centers between 2000 and 2016from time of initial presentation to last documented visit. MS-IBD patients were matched to 112 patients with IBD alone in 1:4 ratio by diagnosis subtype (ulcerative colitis or Crohn's disease) and gender. Demographic and phenotypic characteristics including disease extent, disease distribution, medication use patterns, and procedural utilization were evaluated and compared between the two groups. Odds ratios and correlations were performed using R studio.

Discussion: Patients with MS-IBD are less likely to utilize anti-TNF therapies and are more likely to use anti-integrin therapies. Despite these therapeutic strategies, MS-IBD patients had similar rates of IBD related surgery, suggesting that avoidance of anti-TNF therapy does not worsen clinical outcomes in this patient population (Figure 1). 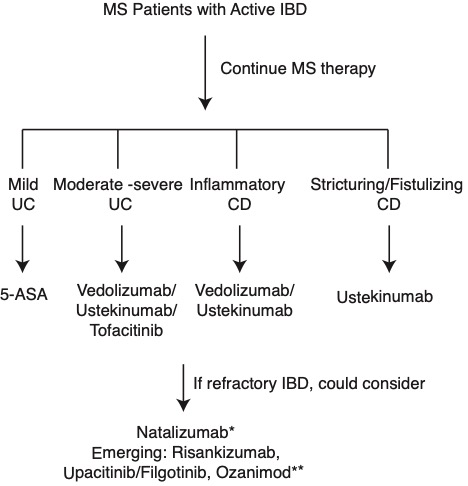 Figure: A proposed treatment algorithm for patients with multiple sclerosis and IBD as avoidance of anti-TNF therapy does not appear to worsen clinical outcomes.
Table: Selected demographic and biologic use in MS-IBD vs IBD. Full analysis not included in this table for space.