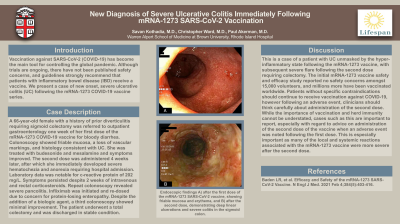 Introduction: Vaccination against SARS-CoV-2 (COVID-19) has become the main tool for controlling the global pandemic. Although trials are ongoing, there have not been published safety concerns, and guidelines strongly recommend that patients with inflammatory bowel disease (IBD) receive a vaccine. We present a case of new onset, severe ulcerative colitis (UC) following the mRNA-1273 COVID-19 vaccine series.

Case Description/Methods: A 66-year-old female with a history of diverticulitis requiring sigmoid colectomy was referred to outpatient gastroenterology within one week after her first dose of the mRNA-1273 COVID-19 vaccine. Colonoscopy showed friable mucosa and a loss of vascular markings and histology was consistent with UC. She was treated with budesonide and mesalamine and symptoms resolved. The second dose was administered 4 weeks later, after which she immediately developed severe hematochezia and anorexia requiring hospital admission. Laboratory data was notable for c-reactive protein of 202 mg/L. Symptoms persisted despite 2 weeks of intravenous and rectal corticosteroids. Repeat colonoscopy revealed severe pancolitis. Infliximab was initiated and re-dosed after 48 hours due to concern for protein-losing enteropathy. Despite the addition of a biologic agent, a third colonoscopy showed minimal improvement. The patient underwent a total colectomy and was discharged in stable condition.

Discussion: This is a clear case of a patient with UC unmasked by the hyper-inflammatory state following the mRNA-1273 vaccine, with subsequent severe flare following the second dose requiring colectomy. A safety and efficacy study reported no safety concerns amongst 15,000 volunteers and millions more have been vaccinated worldwide. Patients without specific contraindications should continue to receive vaccination against COVID-19, however following an adverse event, clinicians should think carefully about administration of the second dose. While the importance of vaccination and herd immunity cannot be understated, cases such as this are important to report, especially with regard to advice on administration of the second dose of the vaccine when an adverse event was noted following the first dose. This is especially important as many of the local and systemic reactions associated with the mRNA-1273 vaccine were more severe after the second dose.

Figure: Endoscopic findings A) after the first dose of the mRNA-1273 SARS-CoV-2 vaccine, showing friable mucosa and erythema, and B) after the second dose, demonstrating deep linear ulcerations and severe colitis in the sigmoid colon.