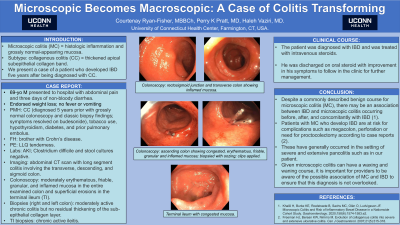 Introduction: The term microscopic colitis (MC) classically describes a condition with histologic inflammation of the colon with grossly normal-appearing mucosa. This condition was once considered relatively benign. One of its subtypes collagenous colitis (CC) is distinguished histologically by a thickened apical subepithelial collagen band. We present a case of a patient who developed IBD five years after being diagnosed with CC.

Case Description/Methods: A 69-year-old male presented to hospital with abdominal pain and three days of non-bloody diarrhea. He endorsed weight loss but denied fever, or vomiting. Five years prior he was diagnosed with CC with grossly normal colonoscopy and colonic biopsies showed increased lamina propria chronic inflammatory cells with focal acute inflammation, mild increase in intraepithelial lymphocytes and diffuse collagenous basement membrane thickening. His symptoms had resolved on budesonide. His other medical history included tobacco use, hypothyroidism, diabetes, and prior pulmonary embolus. His brother had Crohn’s disease.

Physical exam revealed left lower quadrant tenderness. Labs showed an acute kidney injury. Infectious workup with Clostridium difficile and stool cultures were negative. An abdominal CT scan showed long segment colitis involving the transverse, descending, and sigmoid colon. Colonoscopy showed moderately erythematous, friable, granular, and inflamed mucosa in the entire examined colon and superficial erosions in the terminal ileum (TI). The biopsies from the right and left colon showed moderately active chronic colitis but no residual thickening of the sub-epithelial collagen layer. TI biopsies showed chronic active ileitis. The patient was diagnosed with IBD and was treated with intravenous steroids. He was discharged on oral steroid with improvement in his symptoms to follow in the clinic for further management.

Discussion: Despite a commonly described benign course for microscopic colitis (MC), there may be an association between IBD and microscopic colitis occurring before, after, and concomitantly with IBD. Patients with MC who develop IBD are at risk for complications such as megacolon, perforation or need for proctocolectomy according to case reports. These have generally occurred in the setting of severe and extensive pancolitis such as in our patient. Given microscopic colitis can have a waxing and waning course, it is important for providers to be aware of the possible association of MC and IBD to ensure that this diagnosis is not overlooked.