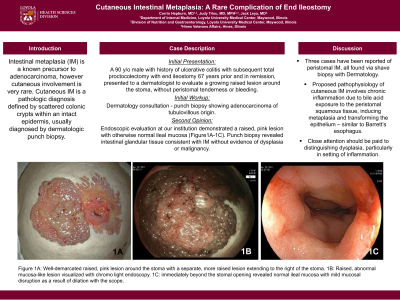 Introduction: Intestinal metaplasia (IM) is a known precursor to adenocarcinoma. Combinations of host genetic factors, responses within the mucosa, as well as dietary/environmental alterations, predispose to mucosal inflammation, leading to atrophy, metaplasia, and eventual dysplasia. Cutaneous involvement is very rare. Cutaneous IM is a pathologic diagnosis defined by scattered colonic crypts within an intact epidermis. We report a case of peristomal intestinal metaplasia in a patient with an ileostomy.

Case Description/Methods: A 90 year-old male with a history of ulcerative colitis with subsequent total proctocolectomy with end ileostomy 67 years prior and in remission, presented to a dermatologist to evaluate a growing raised lesion around the stoma. He denied any abdominal pain, changes in stool output or consistency, weight loss, or changes in appetite. He did not have peristomal tenderness or bleeding from the site. Biopsy of the area revealed adenocarcinoma with tubulovillous origin and invasion into the lamina propria. Surgery was planned, but he opted for a second opinion at our institution. He underwent an ileoscopy to evaluate whether the adenocarcinoma extended into the ileum. Around the stoma, there was a well-demarcated raised, pink lesion that was not friable (Figure 1A); a separate lesion was seen extending to the right of the stoma (Figure 1B). The ileal mucosa was normal without any evidence of invading lesions (Figure 1C). Dermatology performed two punch biopsies from the lateral and medial lesion edges. The biopsies revealed intraepidermal growth of intestinal glandular tissue, consistent with IM, with dense chronic and scattered acute inflammation. No dysplasia or malignancy was seen. He opted to not pursue further investigation as he was otherwise asymptomatic.

Discussion: Three other cases have documented cutaneous peristomal IM in patients with inflammatory bowel disease, all found via shave biopsy by dermatology. The proposed pathophysiology involves chronic inflammation due to bile acid exposure to the peristomal squamous tissue, inducing metaplasia and transforming the epithelium, similar to Barrett’s esophagus. Inflammation from IBD has been proposed as a pathway for cutaneous IM in reported cases, but our patient had been in remission for 67 years. Distinguishing dysplasia is critical, particularly in the setting of inflammation. Documented treatment includes electrocautery with repeat biopsies to evaluate for eradication.

Figure: Figures: 1A: A well-demarcated raised, pink lesion around the stoma with a separate, more raised lesion extending to the right of the stoma. 1B: Raised, abnormal mucosa-like lesion visualized with chromo light endoscopy. 1C: Immediately beyond the stoma with mild mucosal disruption as a result of dilation with the scope.