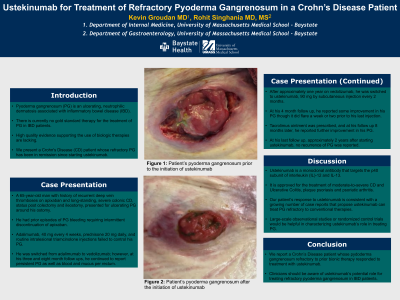 Introduction: Pyoderma gangrenosum (PG) is an ulcerating, neutrophilic dermatosis associated with inflammatory bowel disease (IBD). There is currently no gold standard therapy for the treatment of PG in IBD patients. High quality evidence supporting the use of biologic therapies are lacking. We present a Crohn's Disease (CD) patient whose refractory PG has been in remission since starting ustekinumab.

Case Description/Methods: A 65-year-old man with history of recurrent deep vein thromboses on apixaban and long-standing, severe colonic CD, status post colectomy and ileostomy, presented for ulcerating PG around his ostomy. He had prior episodes of PG bleeding requiring intermittent discontinuation of apixaban. Adalimumab, 40 mg every 4 weeks, prednisone 20 mg daily, and routine intralesional triamcinolone injections failed to control his PG. He was switched from adalimumab to vedolizumab; however, at his three and eight month follow ups, he continued to report persistent PG as well as blood and mucus per rectum.

After approximately one year on vedolizumab, he was switched to ustekinumab, 90 mg by subcutaneous injection every 2 months. At his 4 month follow up, he reported some improvement in his PG though it did flare a week or two prior to his last injection. Tacrolimus ointment was prescribed, and at his follow up 8 months later, he reported further improvement in his PG. At his last follow up, approximately 2 years after starting ustekinumab, no recurrence of PG was reported.

Discussion: Ustekinumab is a monoclonal antibody that targets the p40 subunit of interleukin (IL)-12 and IL-13. It is approved for the treatment of moderate-to-severe CD and Ulcerative Colitis, plaque psoriasis and psoriatic arthritis. Our patient’s response to ustekinumab is consistent with a growing number of case reports that propose ustekinumab can treat PG refractory to conventional therapies. Large-scale observational studies or randomized control trials would be helpful in characterizing ustekinumab’s role in treating PG. 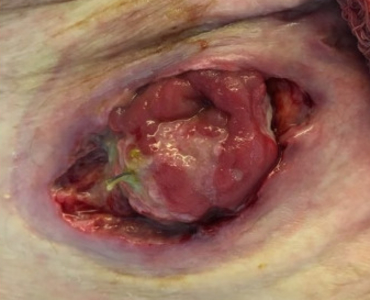