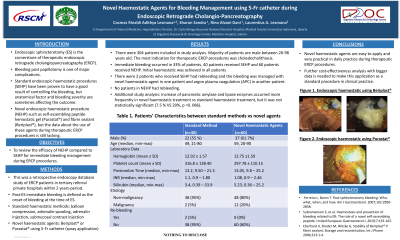 Introduction:
Endoscopic sphincterotomy (ES) is the cornerstone of therapeutic endoscopic retrograde cholangiopancreatography (ERCP) for various pancreaticobiliary disorders. Bleeding is one of major complications after pancreatitis. Novel endoscopic haemostatic agents have been recently used, such as Purastat® and Beriplast®. These novel hemostatic methods are easy to use, however, there is no large study using these novel haemostatic agents during ERCP procedure.

Methods: This was an endoscopy database study of patients who underwent ERCP procedure in tertiary referral private hospitals within 2 years-period. Patients on anticoagulant or antiplatelet therapy, liver cirrhosis, chronic kidney disease or other coagulation disorders were excluded in this study. Statistical analyses were performed using Statistical Package for the Social Science (SPSS) for Windows, version 16.0.

Discussion: To our knowledge, this is the first study with a large number of patients, looking at the role of novel haemostatic agents as the first choice for immediate bleeding management during ERCP procedures in all patients who underwent ES. We have shown the innovative method by using two 5-fr cannula catheters when the double lumen catheter is not available since the process needs the two-vial compound injected together. Even though the standard conventional haemostatic management is still quite effective in post ES bleeding, however, the innovation method has made easier to perform for experience as well as less experience endoscopists.