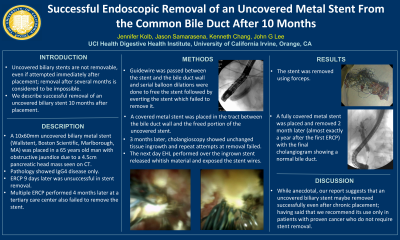 Case Description/Methods: A 65 year old man presented with obstructive jaundice and CT showing a 4.5cm pancreatic head mass. He underwent EUS and fine needle biopsy of the mass and insertion of a 10x60mm uncovered biliary metal stent (Wallstent, Boston Scientific, Marlborough, MA) for palliation. Pathology did not show cancer and the patient was diagnosed with IgG4 sclerosing pancreatitis. ERCP was repeated 9 days later but the stent could not be removed. Patient was referred to a tertiary care center for stent removal and underwent ERCP with placement of two fully covered metal stents within the original stent 4 months later. Repeat ERCP 3 weeks later was successful in removing both of the covered stents but not the original stent. Patient consulted at other tertiary care centers but was told that the stent could not be removed, until ultimately he was referred to us for another attempt. Cholangioscopy 8months after the initial ERCP showed that the distal third of the stent was completely covered by tissue ingrowth while the proximal end was only partially covered. Guidewire was passed between the stent and the bile duct wall and serial balloon dilations were done to free the stent followed by everting the stent which failed to remove it. A covered metal stent was placed in the tract between the bile duct wall and the freed portion of the uncovered stent. Three months later, cholangioscopy showed persistent tissue ingrowth unchanged from our initial ERCP. Exhaustive efforts at repeat balloon dilation and forceps removal failed. The next day, cholangioscopy and electrohydraulic lithotripsy was performed over the ingrown stent releasing whitish material and exposing the stent wires. The intact stent was then removed with rat tooth forceps. A fully covered metal stent was placed and removed 2 month later (almost exactly a year after the first ERCP) with the final cholangiogram showing a normal bile duct.

Discussion: While anecdotal, our report suggests that an uncovered biliary stent maybe removed successfully even after chronic placement; having said that we recommend its use only in patients with proven cancer who do not require stent removal. 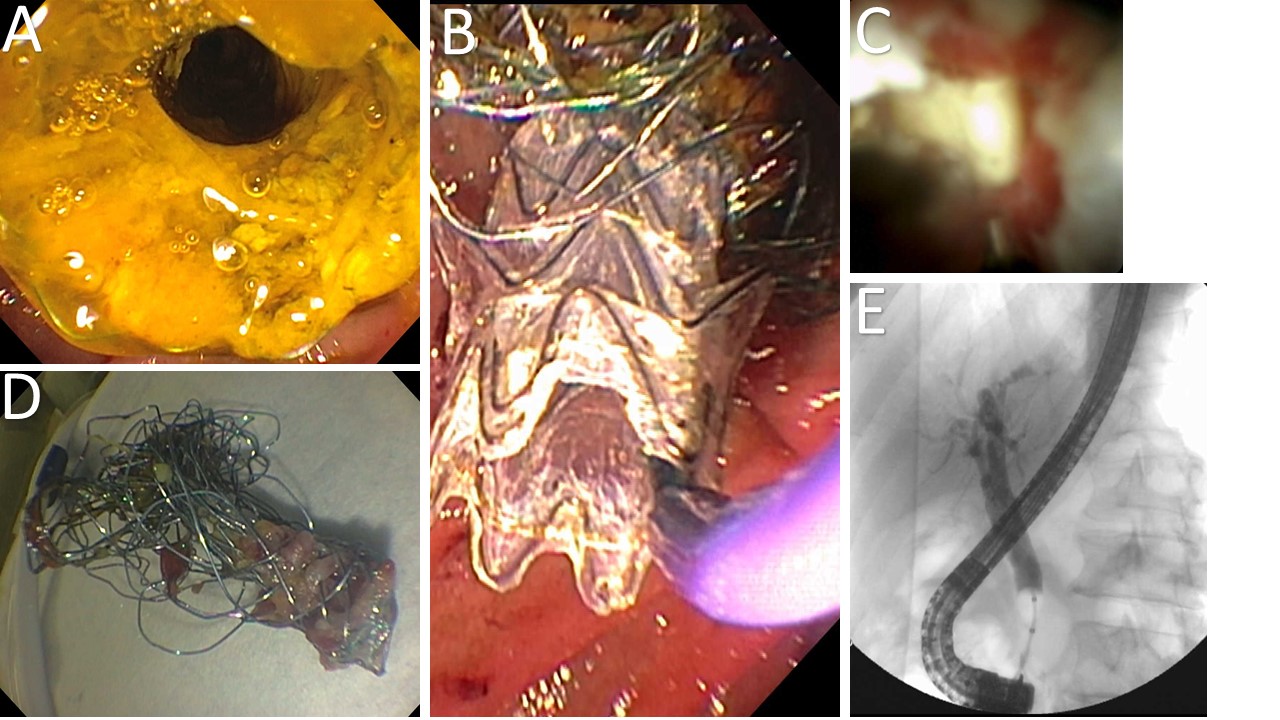