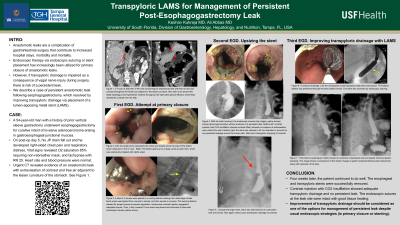 Introduction: Anastomotic leaks are a complication of gastrointestinal surgery that contribute to increased hospital stays, morbidity and mortality. Endoscopic therapy via endoscopic suturing or stent placement has increasingly been utilized for primary closure of anastomotic leaks. However, if transpyloric drainage is impaired as a consequence of vagal nerve injury during surgery, there is risk of a persistent leak. We describe a case of persistent anastomotic leak following esophagogastrectomy, which resolved by improving transpyloric drainage via placement of a lumen-apposing metal stent (LAMS).

Case Description/Methods: A 54-year-old man with a history of prior vertical sleeve gastrectomy underwent esophagogastrectomy for curative intent of invasive adenocarcinoma arising in gastroesophageal junctional mucosa.
On post-op day 5, his JP drain fell out and he developed right-sided chest pain and respiratory distress. His vital signs revealed O2 saturation of 85% requiring a non-rebreather mask, and tachypnea with RR 25. His blood pressure and HR remained normal. Urgent CT revealed evidence of an anastomotic leak with extravasation of contrast and free air adjacent to the lesser curvature of the stomach. The patient underwent EGD which showed a 1.5 cm defect at the esophagogastric anastomosis. An endoscopic suturing device was used to place two sutures to close the defect. Intraoperative esophagram with contrast and CO2 insufflation suggested adequate closure. Then, an 18 mm fully covered stent was placed and sutured in place. Barium esophagram the following day unfortunately revealed a persistent leak along with poor transpyloric drainage of contrast. Repeat endoscopy was performed and the stent was upsized for a larger 23 mm diameter stent.
Esophagram the following day again revealed a persistent leak. Thus, during the following endoscopy, attention was placed to the pylorus, which was noted to spasm. A lumen-apposing metal stent (LAMS) was placed across the pylorus and sutured in place. The LAMS was dilated with a 20 mm TTS (through-the-scope) balloon. Subsequent barium esophagram showed improved transpyloric drainage of contrast and resolution of the anastomotic leak. The stents were removed four-weeks later, and the patient continued to do well.

Discussion: If usual endoscopic strategies (i.e. primary closure or stenting) are unsuccessful, improving transpyloric drainage should be considered for the management of persistent post-esophagogastrectomy anastomotic leaks.