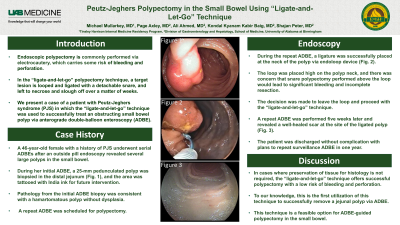 Introduction: Endoscopic polypectomy is commonly performed via electrocautery, which carries some risk for bleeding and perforation. In recent years, a “ligate-and-let-go” technique has been proposed, in which a target lesion is looped and ligated with a detachable snare, and left to necrose and slough off. To date, this technique has largely been utilized via upper endoscopy and colonoscopy to remove esophageal, gastric, colonic, and terminal ileal polyps and lipomas. We present a case of a patient with Peutz-Jeghers syndrome in which the “ligate-and-let-go” technique was used to successfully treat an obstructing small bowel hamartoma via anterograde double-balloon enteroscopy (ADBE).

Case Description/Methods: A 46-year-old female with a history of Peutz-Jeghers syndrome was scheduled for ADBE for endoscopic removal of a large jejunal polyp. She had a history of complications due to intestinal polyps, including a remote episode of intussusception requiring partial resection of the small bowel. The ADBE was performed due to findings of a large polyp and possible early intussusception on CT Enterography and pill camera enteroscopy. ADBE revealed a 25-mm pedunculated polyp in the distal jejunum. Biopsies were obtained and the region was tattooed with India ink for future intervention. Pathology was consistent with hamartomatous polyp without dysplasia. During repeat ADBE, a ligature was successfully placed at the neck of the polyp (via endoloop device). The loop was placed high on the polyp neck and there was concern that snare polypectomy performed above the loop would result in significant bleeding and incomplete resection. Decision was made to leave the loop and proceed with “ligate-and-let-go” technique. Repeat ADBE was performed five weeks later, which revealed a well-healed scar at the site of the ligated polyp as identified by prior tattoo. She was discharged with plans to repeat surveillance ADBE in one year.

Discussion: In certain cases where preservation of tissue for histology is not required, the “ligate-and-let-go” technique offers successful polypectomy with a low risk of bleeding and perforation. In our case, the technique was performed for removal of a large small bowel hamartoma via ADBE with good results. In patients requiring urgent removal of an obstructing small bowel polyp, the initial endoscopic approach can serve a diagnostic purpose. If there is no evidence of high-grade dysplasia or concern for malignancy, the polyp may be ligated and left to safely necrose over a matter of weeks.