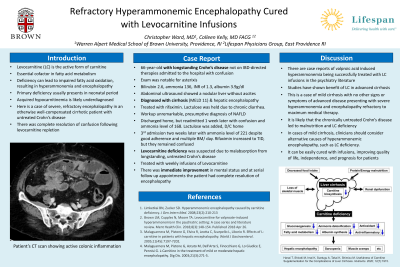 Introduction: Levocarnitine (LC) is the active form of carnitine. It is an essential cofactor in fatty acid metabolism, and deficiency can lead to impaired fatty acid oxidation, resulting in hyperammonemia and encephalopathy. Whilst primary deficiency usually presents in the neonatal period, acquired hypocarnitinemia is likely underdiagnosed. We present a case of severe, refractory encephalopathy in an otherwise well-compensated cirrhotic patient with Crohn’s disease (CD), with complete resolution of confusion following LC repletion.

Case Description/Methods: A 66-year-old female with longstanding CD not on IBD-directed therapies was admitted to the hospital with confusion. On physical exam she had asterixis. Laboratory workup was notable for bilirubin of 2.6µmol/l, ammonia level of 136µmol/l. International normalized ratio of 1.3 and albumin of 3.9g/dl. Abdominal ultrasound showed a nodular liver without ascites. She was diagnosed with cirrhosis and hepatic encephalopathy and treated with rifaximin. Lactulose was held due to chronic diarrhea. Model for end-stage liver disease score was 11. Cirrhosis workup was unremarkable, with presumptive diagnosis of non-alcoholic fatty liver disease. The patient was discharged home, however she presented one week later with confusion and ammonia level of 168. Lactulose was added and she was discharged, only to have a third identical admission two weeks later with ammonia level of 221 despite good adherence and multiple bowel movements per day. Despite increasing rifaximin to three times a day, she had ongoing episodes of confusion. At this time, LC deficiency was suspected due to malabsorption from longstanding, untreated Crohn’s, and she was administered weekly infusions of LC. There was an immediate improvement in mental status and at serial follow up appointments the patient had complete resolution of encephalopathy.

Discussion: There are cases of valproic acid induced hyperammonemia being successfully treated with LC infusions in the psychiatry literature, and studies have shown benefit of LC in advanced cirrhosis, however this is a case of mild cirrhosis with no other signs of symptoms of advanced disease presenting with severe hyperammonemia and encephalopathy refractory to maximum medical therapy. In such cases, the clinician should consider alternative causes of hyperammonemic encephalopathy, such as LC deficiency. It can be cured with infusions, and resulted in significant improvement in quality of life, independence, and prognosis for this patient.