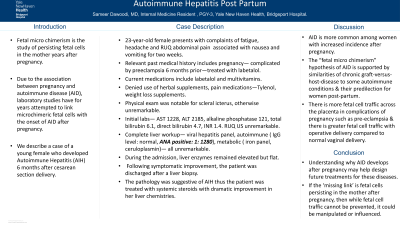 Introduction: Fetal micro chimerism is the study of persisting fetal cells in the mother years after pregnancy. Due to the association between pregnancy and autoimmune disease (AID), laboratory studies have for years attempted to link microchimeric fetal cells with the onset of AID after pregnancy.

We describe a case of a young female who developed Autoimmune Hepatitis (AIH) 6 months after cesarean section delivery.

Discussion: The patient had normalization of transaminases while on labetalol thus unlikely to be DILI. Given the biopsy findings and elevated ANA titers there was a high suspicion for AIH despite normal total IgG. AID is more common among women with increased incidence after pregnancy. The “fetal micro chimerism” hypothesis of AID is supported by similarities of chronic graft-versus-host-disease to some autoimmune conditions & their predilection for women post-partum. There is more fetal cell traffic across the placenta in certain complications of pregnancy such as pre-eclampsia, and there is greater fetal cell traffic with operative delivery compared to normal vaginal delivery. Understanding why autoimmune disease develops after pregnancy may help design future treatments for these varied disease processes. If the ‘missing link’ is fetal cells persisting in the mother after pregnancy, then while fetal cell traffic cannot be prevented, it could be manipulated or influenced.