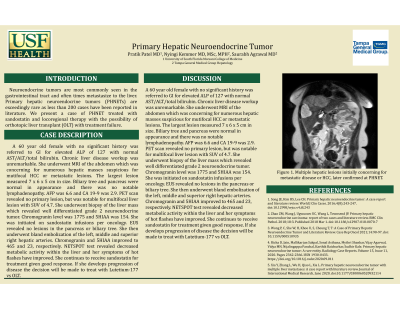 Introduction: Neuroendocrine tumors are most commonly seen in the gastrointestinal tract and often times metastasize to the liver. Primary hepatic neuroendocrine tumors (PHNETs) are exceedingly rare as less than 200 cases have been reported in literature. We present a case of PHNET treated with sandostatin and locoregional therapy with the possibility of orthotopic liver transplant (OLT) with treatment failure.

Case Description/Methods: A 60 year old female with no significant history was referred to GI for elevated ALP of 127 with normal AST/ALT/total bilirubin. Chronic liver disease workup was unremarkable. She underwent MRI of the abdomen which was concerning for numerous hepatic masses suspicious for mutifocal HCC or metastatic lesions. The largest lesion measured 7 x 6 x 5 cm in size. Biliary tree and pancreas were normal in appearance and there was no notable lymphadenopathy. AFP was 6.6 and CA 19-9 was 2.9. PET scan revealed no primary lesion, but was notable for multifocal liver lesion with SUV of 4.7. She underwent biopsy of the liver mass which revealed well differentiated grade 2 neuroendocrine tumor. Chromogranin level was 1775 and 5HIAA was 154. She was initiated on sandostatin infusions per oncology. EUS revealed no lesions in the pancreas or biliary tree. She then underwent bland embolization of the left, middle and superior right hepatic arteries. Chromogranin and 5HIAA improved to 465 and 23, respectively. NETSPOT test revealed decreased metabolic activity within the liver and her symptoms of hot flashes have improved. She continues to receive sandostatin for treatment given good response. If she develops progression of disease the decision will be made to treat with Lutetium-177 vs OLT.

Discussion: Primary hepatic neuroendocrine tumors are incredibly rare and thus there is no clear guidance regarding the management of these tumors. Usually PHNETs are very slow growing and only at the end stage do they result in symptoms. The symptoms are usually related to the size of the tumor and generally not the typical carcinoid symptoms, which are seen in NETs that metastasize to the liver. Diagnosis generally involves ruling out a primary source via extensive testing prior to verifying the diagnosis of PHNET. Imaging and biopsy are generally not sufficient to make the diagnosis. PHNET is often times difficult to distinguish radiologically from HCC. Although there are no current guidelines for treatment of PHNET, resection is recommended. OLT may be a last line option in certain instances. 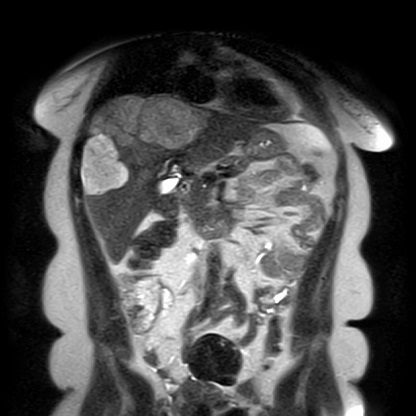