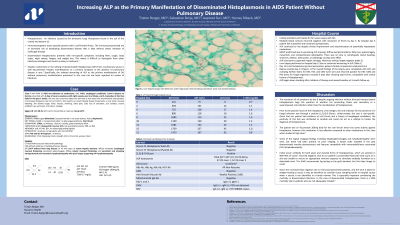 Introduction: Histoplasmosis is an infection caused by the dimorphic fungi Histoplasma found in the soil of the central and eastern US. Most immunocompetent hosts present with a self-limited illness, however the immunocompromised may develop disseminated disease. Without initiation of antifungal therapy in these cases, histoplasmosis is fatal. The symptoms are non-specific, making rapid diagnosis and treatment difficult. Hepatic involvement in the setting of disseminated histoplasmosis (DH) from a pulmonary source is documented, however hepatic manifestations as a primary symptom in the absence of pulmonary disease is rare. Specifically, the isolated worsening of ALP as the primary manifestation of DH without pulmonary manifestations has not been reported on review of literature.

Discussion: Our case presents the workup of DH in an AIDS patient with the primary manifestation of isolated elevations in ALP without pulmonary disease. It is interesting that despite ongoing infection without adequate antifungal therapy she remained afebrile and felt at baseline early in hospital course. Given the critical CD4 count she was not able to mount an immune response to stimulate the formation of antibodies to a detectable level, resulting in negative serum CF for yeast and mycelial Abs and delay in treatment. Given the increased false negative rate of Ab testing in AIDS patients and time it takes for Ag testing to result, it may be beneficial to consider tissue sampling earlier when a source is not identified, especially considering the mortality of disseminated infections without rapid treatment.