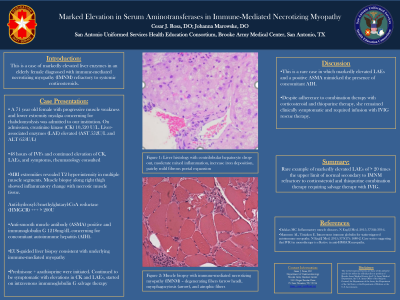 Introduction: This is an elderly female diagnosed with immune-mediated necrotizing myopathy with marked elevations in serum aminotransaminases.

Case Description/Methods: A 71 year old female was admitted for progressive proximal muscle weakness and lower extremity myalgia with an initial creatinine kinase (CK) of 10,520U/L concerning for rhabdomyolysis. Gastroenterology was consulted given an elevation in liver-associated enzymes in a hepatocellular injury pattern (AST 552U/L and ALT 653U/L) thought to be due to muscle breakdown. After a few days of intravenous fluids, the myalgias continued and her CK remained elevated. Rheumatology was consulted and an MRI of the extremities was pursued revealing T2 hyper-intensity and enhancement in multiple muscle segments concerning for an inflammatory myopathy. A muscle biopsy was obtained along the right thigh confirming an inflammatory change with necrotic muscle fibers. Furthermore, an anti-hydroxy-3-methylglutaryl-CoA reductase (HMGCR) returned strongly positive ( >200U). Her atorvastatin 10mg PO qHS was discontinued. Chronic liver disease serologic evaluation resulted in a positive anti-smooth muscle antibody (ASMA) and an immunoglobulin G (IgG) level of 1218mg/dL. Given the concern for a concomitant autoimmune hepatitis, an EUS-guided liver biopsy was pursued which showed centrilobular hepatocyte drop-out with associated moderate mixed inflammation, increased iron deposition (2+ out of 4), with patchy mild fibrous portal expansion with rare periportal fibrosis without features consistent with autoimmune hepatitis and were thought to be due to the underlying immune-mediated necrotizing myopathy (IMNM). She was diagnosed with anti-HMGCR myopathy and was started on a course of prednisone. After 1 month of corticosteroid therapy and one week of azathioprine, her LAEs remained elevated (AST 577U/L and ALT 645U/L) and she continued to be symptomatic with worsening weakness. Rheumatology will be initiating a course of intravenous immunoglobulin G (IVIG) given the failure to respond to corticosteroid and thiopurine combination therapy.

Discussion: This is a rare example of markedly elevated liver enzymes in a hepatocellular injury pattern of greater than 20 times the upper limit of normal mimicking autoimmune hepatitis in association with IMNM refractory to corticosteroid and thiopurine combination therapy. Salvage therapy with intravenous immunoglobulin G (IVIG) will be started by rheumatology. Liver enzyme levels are expected to downtrend with improvement in CK. 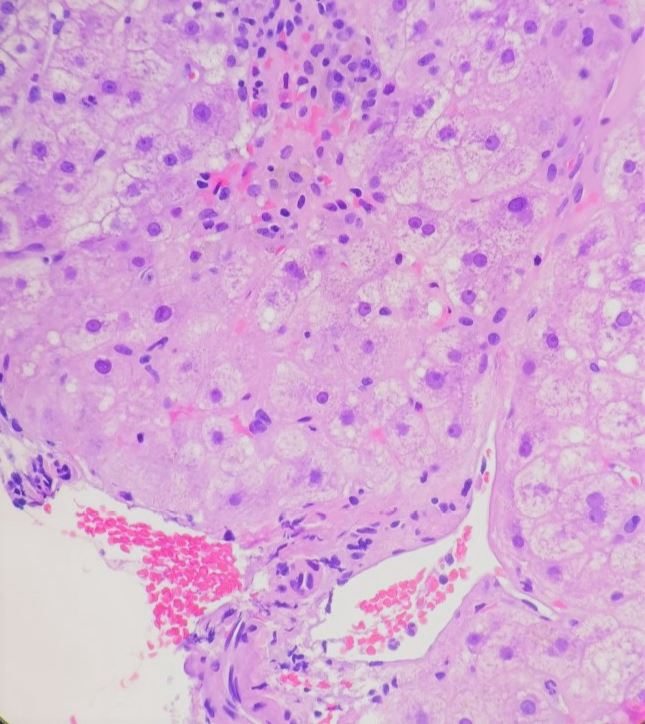 Figure: The top of the image illustrates centrilobular hepatocyte drop-out with associated inflammation including plasma cells and ceroid laden macrophages. Contrast these changes with the normal portal tract in the bottom portion of the image. (400X magnification).