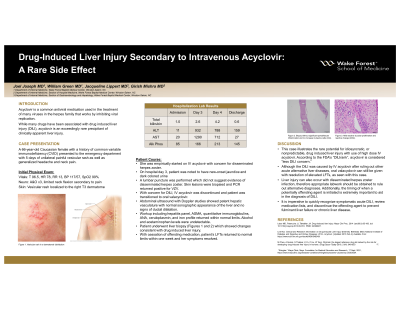 Introduction: A variety of medications, including prescription, over-the-counter, and herbal drugs, have been implicated in drug-induced liver injury (DILI). Acyclovir is a common antiviral medication used in the treatment of many viruses in the herpes family that has only been shown as a rare cause of clinically apparent liver injury. We report the case of a patient with DILI secondary to intravenous (IV) acyclovir administration in the setting of herpes zoster.

Case Description/Methods: A 66-year-old Caucasian female with a history of common variable immunodeficiency (CVID) presented to the emergency department with 5 days of unilateral painful vesicular rash localized to the T3 dermatome as well as generalized headache and neck pain. Given her immunocompromised status neurological complaints, she was empirically started on IV acyclovir with concern for disseminated herpes zoster. Labs on admission including renal and liver function tests (LFTs) were within normal limits. On hospital day 3, patient was noted to have new-onset jaundice and dark colored urine. LFTs were checked at that time and noted to be elevated including AST 1290, ALT 932, alkaline phosphatase 166, and total bilirubin 2.6 (direct 1.6). A lumbar puncture was performed which did not suggest evidence of disseminated herpes zoster. With concern for DILI, IV acyclovir was discontinued and patient was transitioned to oral valacyclovir. Workup including hepatitis panel, auto-immune serologies, and alcohol/medication levels were all unremarkable. Abdominal ultrasound showed normal Doppler flow and no signs of ductal dilatation. Patient underwent liver biopsy which showed changes consistent with drug induced liver injury. With cessation of offending medication, patient’s LFTs returned to normal limits within one week and her symptoms resolved.

Discussion: This case illustrates the rare potential for idiosyncratic drug induced liver injury with use of high dose IV acyclovir. Although the DILI was caused by IV acyclovir after ruling out other acute alternative liver diseases, oral valacyclovir can still be given with resolution of elevated LFTs. It is imperative to quickly recognize symptomatic acute DILI, review medication lists, and discontinue the offending agent to prevent fulminant liver failure or chronic liver disease.