P1943 - Abscess and Secondary Peritonitis Due to Dropped Gallstones 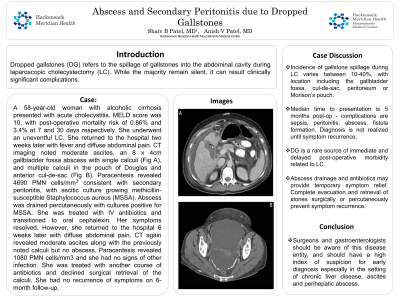 Introduction: Dropped gallstones (DG) refers to the spillage of gallstones into the abdominal cavity during laparoscopic cholecystectomy (LC). While the majority remain silent, it can result clinically significant complications.

Case Description/Methods: A 58-year-old woman with alcoholic cirrhosis presented with acute cholecystitis. Model for End-Stage Liver Disease (MELD) score was 10, with post-operative mortality risk of 0.86% and 3.4% at 7 and 30 days respectively. She underwent an uneventful LC. She returned to the hospital two weeks later with fever and diffuse abdominal pain. Computerized Tomography (CT) imaging noted moderate ascites, an 8 x 4cm gallbladder fossa abscess with single calculi (Fig 1A), and multiple calculi in the pouch of Douglas and anterior cul-de-sac (Fig 1B). Paracentesis revealed 4690 polymorphonuclear (PMN) cells/mm3 consistent with secondary peritonitis, with ascitic culture growing methicillin-susceptible Staphylococcus aureus (MSSA). Abscess was drained percutaneously with cultures positive for MSSA. She was treated with intravenous antibiotics and transitioned to oral cephalexin. Her symptoms resolved. However, she returned to the hospital 6 weeks later with diffuse abdominal pain. CT again revealed moderate ascites along with the previously noted calculi but no abscess. Paracentesis revealed 1080 PMN cells/mm3 and she had no signs of other infection. She was treated with another course of antibiotics and declined surgical retrieval of the calculi. She had no recurrence of symptoms on 6-month follow-up.

Discussion: We present here a case of abscess and secondary peritonitis due to DG. The incidence of gallstone spillage during LC varies between 10-40%, with location including the gallbladder fossa, cul-de-sac, peritoneum or Morison’s pouch. Median time to presentation is 5 months post-operatively, and complications include sepsis, peritonitis, abscess, fistula formation. The diagnosis is frequently missed on initial presentation, and not realized until recurrence of symptoms. Abscess drainage and antibiotics may only provide temporary symptom relief. However, complete evacuation and retrieval of stones either surgically or percutaneously will prevent symptom recurrence. DG is a rare source of immediate and delayed post-operative morbidity related to LC. Surgeons and gastroenterologists should be aware of this disease entity, and should have a high index of suspicion for early diagnosis especially in the setting of chronic liver disease, ascites and perihepatic abscess.