P1984 - Gastrointestinal Hemorrhage Due to Duodenal Varix: A Case Report 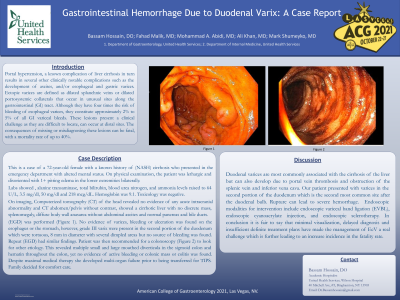 Introduction: EcV are defined as dilated splanchnic veins or dilated portosystemic collaterals that occur in unusual sites along the gastrointestinal (GI) tract.

Although they have four times the risk of bleeding of esophageal varices, they constitute 2% to 5% of all GI variceal bleeds [1].

The consequences of missing or misdiagnosing these lesions can be fatal, with a mortality rate of up to 40% [1].

Case Description/Methods: A 72-year-old female with a known history of NASH cirrhosis presented in the emergency department with altered mental status.

An Esophagogastroduodenoscopy (EGD)(Figure 1) showed, no evidence of varices, bleeding or ulceration was found on the esophagus or the stomach, however, grade III varix were present in the second portion of the duodenum which were tortuous, 8 mm in diameter with several dimpled areas but no source of bleeding was found.

A colonoscopy (Figure 2) which revealed multiple small and large mouthed diverticula in the sigmoid colon and hematin throughout the colon, yet no evidence of active bleeding or colonic mass or colitis was found.

After her colonoscopy findings, she was recommended for an outpatient video capsule endoscopy, however, despite maximal medical therapy she developed multi-organ failure and the family consented to comfort care. The patient passed on 28th January 2021.

Discussion: A nationwide survey in Japan reported the rectum (44.5%) as the most frequent site of EcVs, followed by the duodenum(32.9%) [3]. Norton et al looked at 169 patients with variceal bleeding due to EcV and found 17% to occur in the duodenum, 17% in the jejunum, ileum, 14% in the colon and 8% in the rectum concluding that duodenal varices were the most common [4]

Duodenal varices are most commonly associated with the cirrhosis of the liver but can also develop due to portal vein thrombosis and obstruction of the splenic vein and inferior vena cava. Rupture can lead to severe hemorrhage. Varices in the duodenal bulb, which occur most frequently in the United States and Europe, are caused by extrahepatic portal obstruction though they may occur in intrahepatic PTH as well. [5] 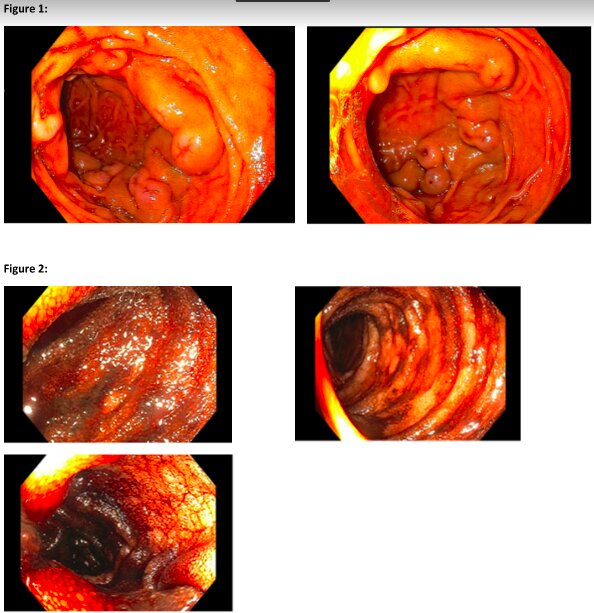