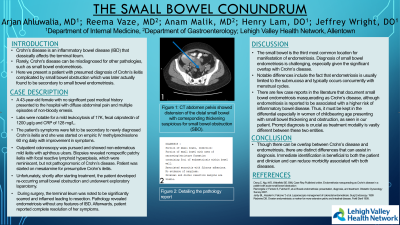 Case Description/Methods: A 43-year-old female with no significant past medical history presented to the hospital with diffuse abdominal pain and multiple episodes of non-bloody emesis. CT abdomen pelvis showed distension of the distal small bowel with corresponding thickening suspicious for small bowel obstruction (SBO). Labs were notable for a mild leukocytosis of 17K, fecal calprotectin of 1200 µg/g and CRP of 128 mg/L. The patient’s symptoms were felt to be secondary to newly diagnosed Crohn’s ileitis and she was started on empiric IV methylprednisolone 60 mg daily with improvement in symptoms. Outpatient colonoscopy was pursued and showed nonedematous mild ileitis with aphthous ulcers. Biopsies revealed nonspecific patchy ileitis with focal reactive lymphoid hyperplasia, which were reminiscent, but not pathognomonic of Crohn’s disease. The patient was ultimately started on mesalamine for presumptive Crohn’s ileitis. Unfortunately, shortly after starting treatment, the patient developed re-occurring small bowel obstruction and underwent exploratory laparotomy. During surgery, the terminal ileum was noted to be significantly scarred and inflamed leading to resection. Pathology revealed endometriosis without any features of IBD. Afterwards, patient reported complete resolution of her symptoms.

Discussion: The small bowel is the third most common location for manifestation of endometriosis. Diagnosis of small bowel endometriosis is challenging, especially given the significant overlap with Crohn’s disease. Notable differences include the fact that endometriosis is usually limited to the submucosa and typically occurs concurrently with menstrual cycles. There are few case reports in the literature that document small bowel endometriosis masquerading as Crohn’s disease and hence it must be kept in the differential especially in women of childbearing age presenting with small bowel thickening and obstruction. Prompt diagnosis is crucial as treatment modality is vastly different between these two entities. Immediate identification is beneficial to both the patient and clinician and can reduce morbidity.