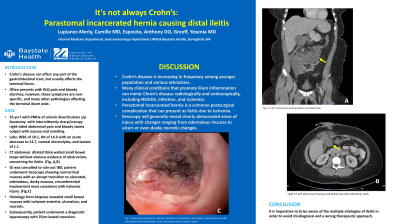 Introduction: Crohn’s disease is an inflammatory process that can affect any part of the gastrointestinal tract. However, the terminal ileum is the most common site involved. Often, patients present with right lower quadrant pain and bloody diarrhea, which could be acute and complicated by obstruction. However, these symptoms are non-specific, and many other pathologies could affect the terminal ileum. In order to accurately treat these patients, it is imperative to understand the etiology of the inflammatory process before initiating management. Thus, due to the potential for misdiagnosis, we present a case of ileitis initially evaluated for Chron’s disease, later found to be an incarcerated parastomal hernia causing necrotic bowel.

Case Description/Methods: A 35-year-old female with a history of colonic diverticulosis status post ileostomy presented with intermittently sharp and crampy right-sided abdominal pain and increasing bloody output from stoma with associated nausea and vomiting. Labs notable for WBC of 18.1, Hb of 14.9 with an acute decrease to 12.7, normal electrolytes, and lactate of 1.1. CT scan of the abdomen revealed dilated, thick-walled small bowel loops without obvious evidence of obstruction concerning for ileitis. Initially, General Surgery was consulted, but due to no concerns for obstruction, supportive management was continued. GI was consulted for ongoing bleeding and concerns for Inflammatory Bowel Disease. The patient underwent ileoscopy, which revealed normal ileal mucosa from stoma to 12-15cm from the stoma, with an abrupt transition to ulcerated, edematous, dusky mucosa, circumferential involvement, most consistent with ischemic injury. Histology revealed small bowel mucosa with ischemic enteritis, ulceration, and necrosis. Subsequently patient underwent a diagnostic laparoscopy with 35cm bowel resection.

Discussion: Crohn’s disease is increasing in frequency among a younger population and various ethnicities. However, many clinical conditions that promote ilium inflammation can mimic Chron’s disease, including NSAIDS, infections, and ischemia. Parastomal incarcerated hernia is a common post-surgical complication that can present as ileitis due to ischemia. Ileoscopy will commonly reveal clearly demarcated areas of injury with changes ranging from edematous mucosa to ulcers or even dusky necrotic changes. Thus, clinicians should have a broad differential diagnosis of ileitis in mind to achieve early diagnosis and avoid unnecessary procedures delaying care. 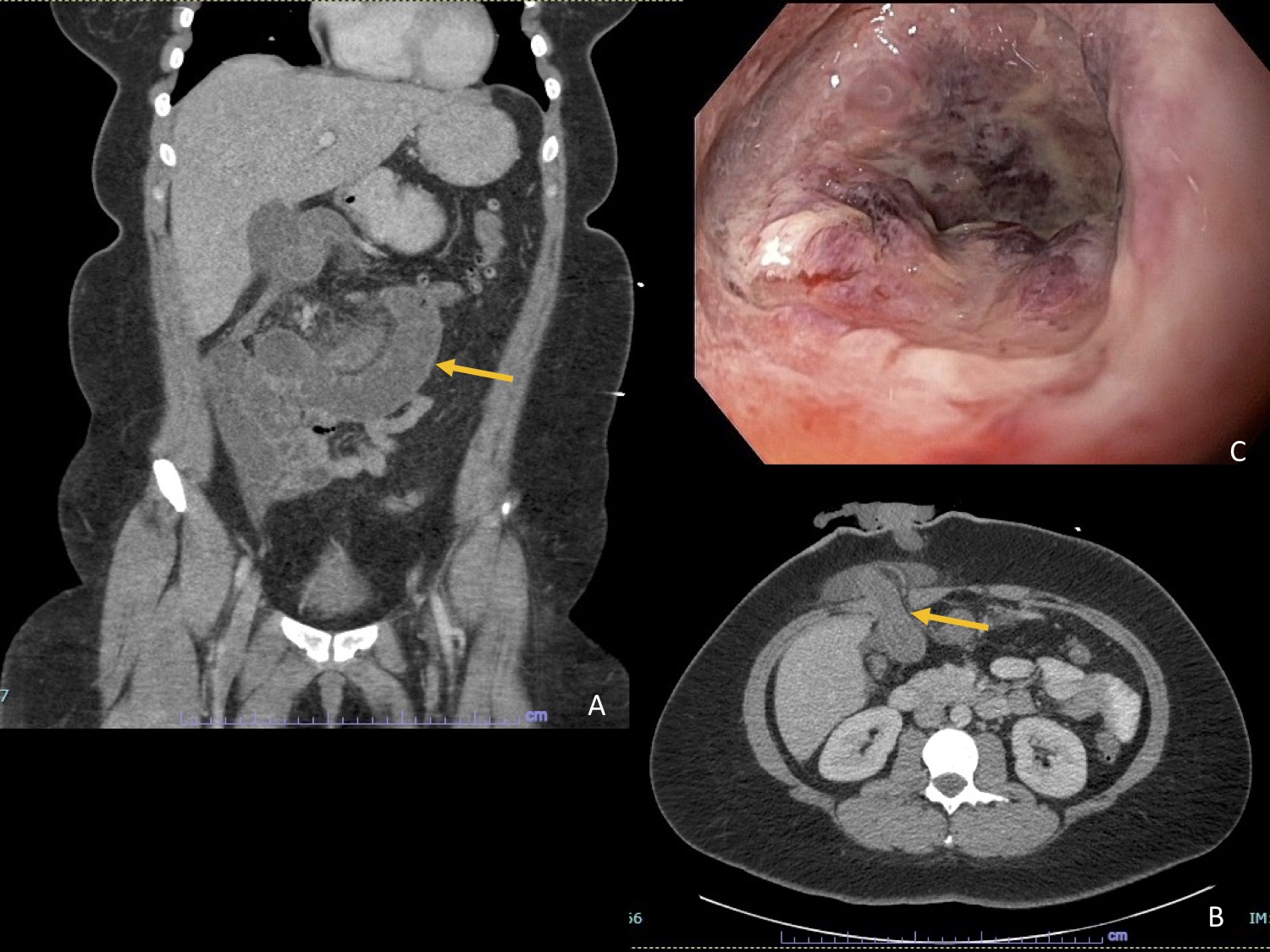