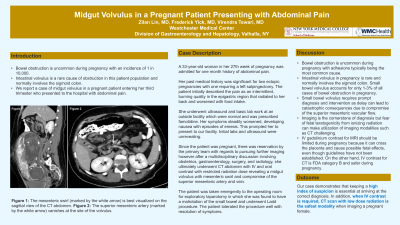 Introduction: Bowel obstruction is uncommon during pregnancy with an incidence of 1 in 10,000. Intestinal volvulus is a rare cause of obstruction in this patient population and normally involves the sigmoid colon. We report a case of midgut volvulus in a pregnant patient entering her third trimester who presented to the hospital with abdominal pain.

Case Description/Methods: A 33-year-old woman in her 27th week of pregnancy was admitted for one month history of abdominal pain. Her past medical history was significant for two ectopic pregnancies with one requiring a left salpingectomy. The patient initially described the pain as an intermittent, burning quality in the epigastric region that radiated to her back and worsened with food intake. She underwent ultrasound and basic lab work at an outside facility which were normal and was prescribed with famotidine. Her symptoms steadily worsened, developing nausea with episodes of emesis. This prompted her to present to our facility. Initial labs and ultrasound were unrevealing. Since the patient was pregnant, there was reservation by the primary team with regards to pursuing further imaging. However, after a multidisciplinary discussion involving obstetrics, gastroenterology, surgery, and radiology, she ultimately underwent CT abdomen with IV and oral contrast with restricted radiation dose, revealing a midgut volvulus with mesenteric swirl and compromise of the superior mesenteric artery and vein. The patient was taken emergently to the operating room for exploratory laparotomy in which she was found to have a malrotation of the small bowel and underwent Ladd procedure. The patient tolerated the procedure well with resolution of symptoms.

Discussion: Bowel obstruction is uncommon during pregnancy with adhesions typically being the most common cause. Intestinal volvulus in pregnancy is rare and normally involves the sigmoid colon. Small bowel volvulus accounts for only 1-3% of all cases of bowel obstruction in pregnancy and requires prompt diagnosis and intervention as delay can lead to catastrophic consequences due to compromise of the superior mesenteric vascular flow. Imaging is the cornerstone of diagnosis but fear of fetal teratogenicity from ionizing radiation can make utilization of imaging modalities such as CT challenging. Our case demonstrates the safety of CT in pregnancy when restricting radiation dose and highlights the need to have a high index of suspicion for bowel obstruction when approaching the pregnant patient with abdominal pain. 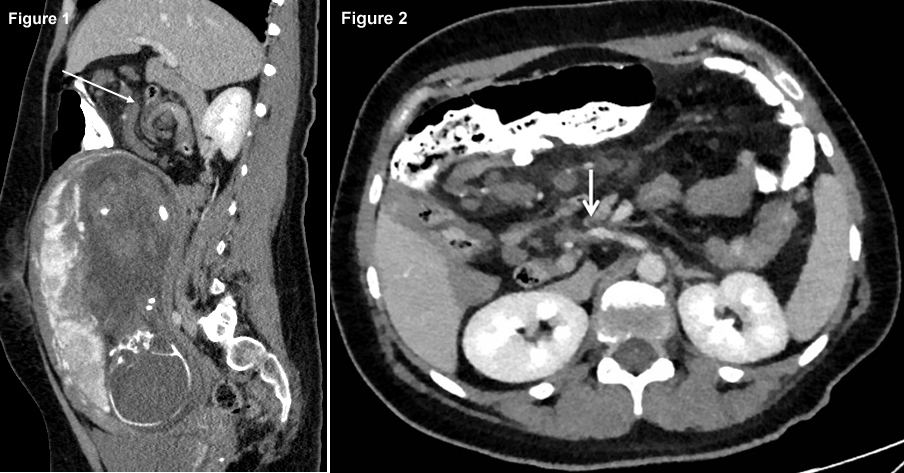