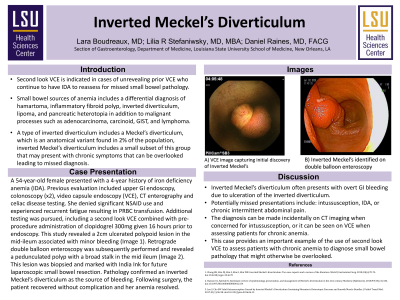 Introduction: The source of iron deficiency anemia (IDA) can be evasive to initial screening modalities including EGD, colonoscopy, and video capsule endoscopy (VCE). Second look VCE is indicated in patients with unrevealing first capsule who continue to have worsening IDA to reassess for missed small bowel pathology. Small bowel masses can be a source of IDA with a differential diagnosis inclusive of benign lesions such as hamartoma, inflammatory fibroid polyp, inverted diverticulum, lipoma, and pancreatic heterotopia in addition to malignant masses such as adenocarcinoma, carcinoid, GIST, and lymphoma. One type of inverted diverticulum found is an inverted Meckel’s diverticulum. As Meckel’s diverticulum is an anatomical variant found in 2% of the population, inverted Meckel’s diverticulum includes a small subset of this group that may present with chronic symptoms that can be overlooked.

Case Description/Methods: A 54 year old female presented with a 4 year history of IDA resulting in PRBC transfusion due to recurrent fatigue. She had prior EGD, colonoscopy (x2), VCE, CTE and celiac testing. Additional testing was pursued, including a 2nd look VCE combined with pre-procedure administration of clopidogrel 300mg given prior to endoscopy. This revealed a 2cm ulcerated polypoid lesion in the mid-ileum associated with minor bleeding. Retrograde double balloon enteroscopy was subsequently performed and revealed a pedunculated polyp with a broad stalk in the mid ileum. The lesion was biopsied and tattooed for resection. Pathology confirmed an inverted Meckel’s diverticulum. Following surgery, the patient recovered well and her anemia resolved.

Discussion: Meckel’s diverticulum are commonly diagnosed in adults as an incidental finding during surgery. In adult patients who present with symptoms, obstruction (35%), overt bleeding with melena or hematochezia (27%), or inflammation (29%) are most common. In rare cases, patients present with chronic pain or as in our case, persistent IDA. Inverted Meckel’s diverticulum is similar as it presents with overt bleeding due to ulceration of the inverted diverticulum. However, potentially missed presentations include: intussusception, IDA, or chronic abdominal pain. The diagnosis of inverted Meckel’s diverticulum can be made incidentally on CT imaging or VCE when assessing patients for chronic anemia. This case provides an important example of the use of second look VCE to assess patients with chronic anemia for small bowel pathology that might otherwise be overlooked. 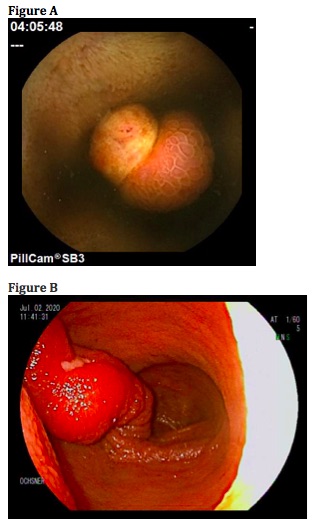