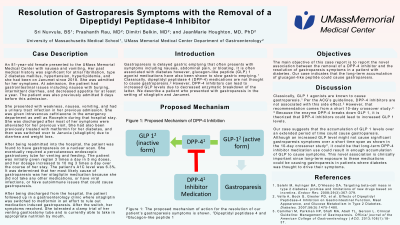 Introduction: Gastroparesis is delayed gastric emptying that often presents with symptoms including nausea, abdominal pain or bloating. It is often associated with diabetes however, glucagon-like peptide (GLP) 1 agonist medications have also been shown to slow gastric emptying.1 Classically, dipeptidyl peptidase 4 (DPP-4) medications are not thought to cause gastroparesis.2 However, DPP-4 inhibitors can lead to increased GLP levels due to decreased enzymatic breakdown of the latter. We describe a patient who presented with gastroparesis in the setting of sitagliptin and Janumet.

Case Description/Methods: An 81-year-old female presented with nausea and vomiting. Her past medical history was significant for atrial fibrillation, type 2 diabetes mellitus, hypertension, hyperlipidemia, and she had been on Janumet since 2018. She also had a prolonged decrease in appetite and was admitted for her symptoms. She was found to have gastroparesis on a nuclear scan, and she eventually required a percutaneous endoscopic gastrostomy tube for venting and feeding. The patient’s A1C level was 6.3%, and her other causes of gastroparesis were ruled out.

The patient followed up in a gastroenterology clinic where sitagliptin was switched to metformin in an effort to rule out medication induced gastroparesis. After the switch, her symptoms resolved. She tolerated a clamp trial of her venting gastrostomy tube and is currently able to take in appropriate nutrition by mouth.

Discussion: Classically, GLP 1 agonists are known to cause gastroparesis. Per the ACG’s guidelines, DPP-4 inhibitors are not associated with this side effect. However, that recommendation comes from a short 10-day crossover study.2 Because the enzyme DPP-4 breaks down GLP 1, it is theorized that DPP-4 inhibitors could lead to increased GLP 1 levels. Our case suggests that the accumulation of GLP 1 levels over an extended period of time could cause gastroparesis. This novel association is clinically important since long term exposure to these medications could be causing gastroparesis in patients where diabetes was thought to drive their symptoms.