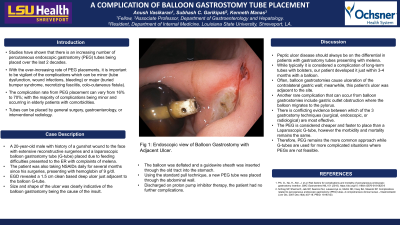 Introduction: Studies have shown that there is an increasing number of percutaneous endoscopic gastrostomy (PEG) tubes being placed over the last 2 decades. With the ever-increasing rate of PEG placements, it is important to be vigilant of the complications which can be minor (tube dysfunction, wound infections, bleeding) or major (buried bumper syndrome, necrotizing fasciitis, colo-cutaneous fistula). The complication rate from PEG placement can vary from 16% to 70% with the majority of complications being minor and occurring in elderly patients with comorbidities. Tubes can be placed by general surgery, gastroenterology, or interventional radiology. We present a case of a young patient with a complication from a laparoscopic balloon gastrostomy.

Case Description/Methods: A 20-year-old male with history of a gunshot wound to the face with extensive reconstructive surgeries and a laparoscopic balloon gastrostomy tube (G-tube) placed due to feeding difficulties presented to the ER with complaints of melena. The patient was also taking NSAIDs daily for several months since his surgeries with Hbg at 9 g/dl. EGD revealed a 1.5 cm clean based deep ulcer just adjacent to the balloon G-tube. The balloon was deflated and a guidewire sheath was inserted through the old tract into the stomach. Using the standard pull technique, a new PEG tube was placed through the abdominal wall. Discharged on proton pump inhibitor therapy, the patient had no further complications.

Discussion: Peptic ulcer disease should always be on the differential in patients with gastrostomy tubes presenting with melena. While typically it is considered a complication of long-term tubes with bolsters, our patient developed it just within 3-4 months with a balloon. Oftentimes, balloon gastrostomies cause ulceration of the contralateral gastric wall; meanwhile, this patient’s ulcer was adjacent to the site. Another rare complication that can occur from balloon gastrostomies include gastric outlet obstruction where the balloon migrates to the pylorus. The patient originally had a surgical gastrostomy tube and was replaced by an endoscopic tube. There is conflicting evidence between which of the 3 gastrostomy techniques (surgical, endoscopic, or radiological) are most effective. The PEG is considered cheaper and faster to place than a G-tube, however the morbidity and mortality remains the same according to most studies. Therefore, PEG remains the more common approach while G-tubes are used for more complicated situations where PEGs are not feasible. 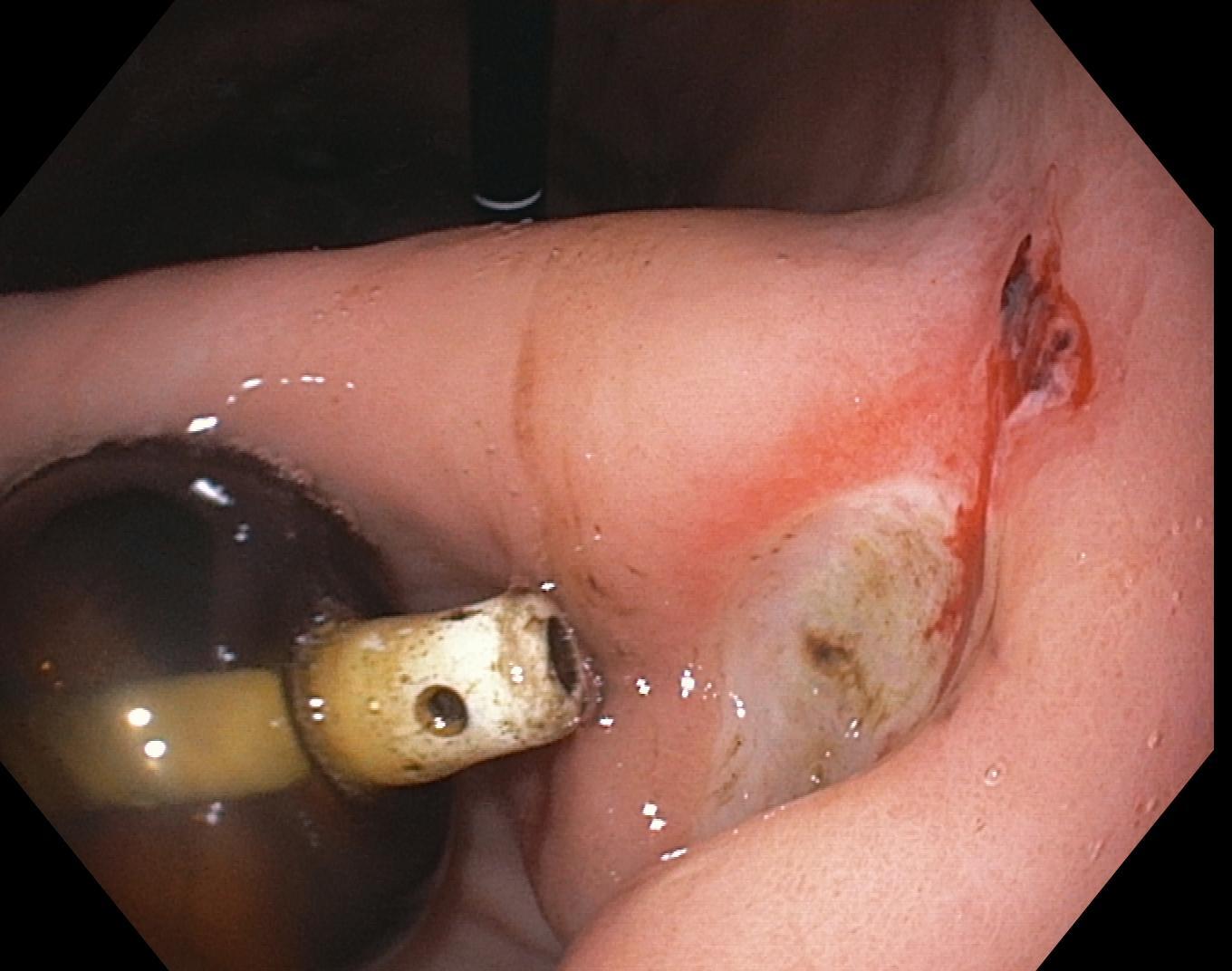