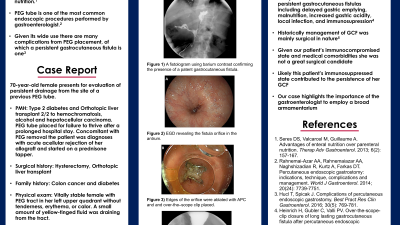 Case Description/Methods: A 70-year-old female with history of orthotopic liver transplant and failure to thrive status post PEG placement and removal presents with drainage from her PEG site since it was removed 2 months prior to presentation. Prior to removal of her PEG, she was diagnosed with acute cellular rejection of her liver allograft and was started on a prolonged corticosteroid taper. On presentation, she was afebrile and hemodynamically stable. Laboratory testing revealed mildly elevated transaminases consistent with improving acute cellular rejection. Physical exam revealed a PEG tract in the left upper quadrant without tenderness, erythema, warmth, or purulence. There was yellow-tinged fluid draining from the tract which raised concern that it was still in communication with the stomach. A fistulogram confirmed the presence of a patent GCF terminating in the antrum. EGD visualized the fistula orifice in the antrum. The orifice edges were ablated with APC to disrupt the tract lining, and an over-the-scope clip was then deployed to close the fistula. The next day, an upper GI series with Gastrografin was performed which did not identify any contrast extravasation beyond the clip, suggesting successful fistula closure. The patient was resumed on a regular diet without further drainage at the fistula site.

Discussion: Persistent GCF, defined as cutaneous drainage of gastric contents via the PEG tract for at least one month, is an uncommon complication following PEG removal. If not addressed, chronic leakage of gastric acid may irritate the skin and soft tissue, predisposing to skin breakdown and cellulitis. In the past, management of persistent GCF was mainly surgical. As new therapeutic modalities have emerged, there has been a shift in the paradigm to favor less invasive endoscopic techniques for the closure of persistent GCF. This case highlights the pivotal role of endoscopy for GCF closure in patients who would otherwise be poor surgical candidates due to age, immunosuppression, and medical comorbidities. 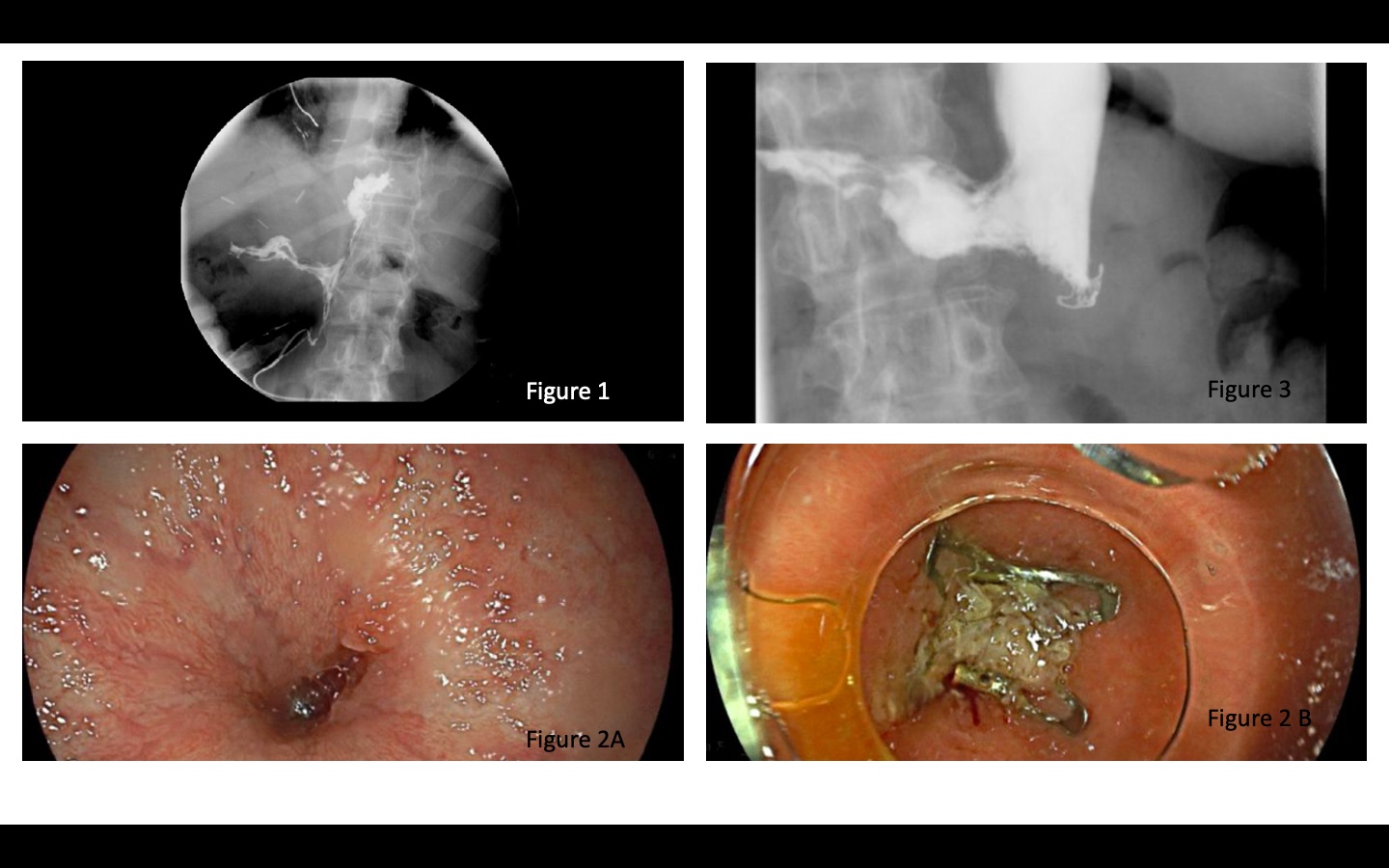 Figure: Figure 1 a fistulogram using barium contrast confirming the presence of a patent GCF terminating in the antrum of the stomach. Figure 2A endoscopic visualization of the fistula orifice in the gastric antrum. Figure 2B shows the orifice after APC disruption and placement of an over-the-scope clip. Figure 3 an upper GI series with Gastrografin was performed which did not identify any contrast extravasation beyond the clip.