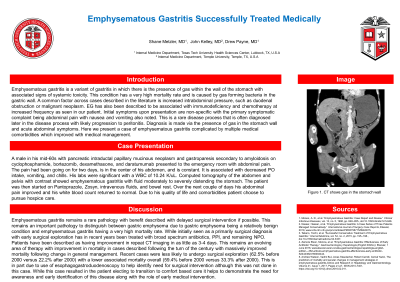 Introduction: Emphysematous gastritis is a variant of gastritis in which there is the presence of gas within the wall of the stomach with associated signs of systemic toxicity. This condition has a very high mortality rate and is cause by gas forming bacteria. A common factor present is increased intrabdominal pressure, such as duodenal obstruction or malignant neoplasm. Emphysematous gastritis is also associated with immunodeficiency and chemotherapy at increased frequency as seen in our patient. Initial symptoms include abdominal pain with nausea and vomiting. This rare disease process that is often diagnosed later in the disease process with likely progression to peritonitis. Diagnosis is made via the presence of intramural air within the stomach with CT remaining the most effective modality. Here we present a case of emphysematous gastritis complicated by multiple medical comorbidities which improved with medical management.

Case Description/Methods: A male in his 60s with pancreatic intraductal papillary mucinous neoplasm and gastroparesis secondary to amyloidosis on chemotherapy presented to the emergency room. He was having abdominal pain that had been going on constantly for two days in the center of his abdomen. It was associated with decreased PO intake, vomiting, and chills. His labs were significant with a WBC of 10.24 K/uL. A CT showed emphysematous gastritis with fluid distending the stomach. The patient was started on Pantoprazole, Zosyn, IV fluids, and bowel rest. Over the next couple of days his abdominal pain improved and WBC returned to normal.

Discussion: Emphysematous gastritis remains a rare pathology with benefit described with delayed surgical intervention. While initially seen as a primarily surgical diagnosis with early surgical exploration, in recent years it has been treated with broad spectrum antibiotics, PPI, and remaining NPO. Patients' have been described as having improvement in repeat CT imaging in as little as 3-4 days. This remains an evolving area of therapy with improvement in mortality in cases described following the turn of the century with massively improved mortality following change in general management. Watson et al recent cases were less likely to undergo surgical exploration (62.5% before 2000 versus 22.2% after 2000) with a lower associated mortality overall (59.4% before 2000 versus 33.3% after 2000). This case helps to demonstrate the need for awareness and early identification of this disease along with the role of early medical intervention. 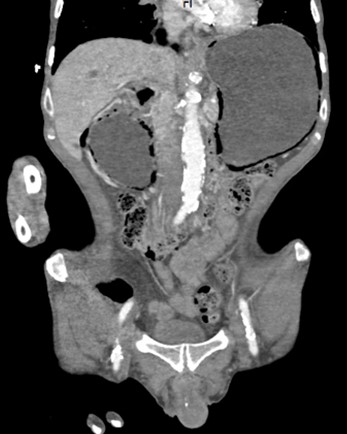 Figure: Figure 1. Picture shows gas within the wall of the stomach.