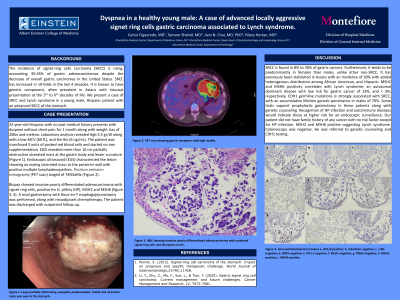 Introduction: The incidence of signet-ring cells carcinoma (SRCC) is rising, accounting for 35-45% of gastric adenocarcinomas despite the decrease of overall gastric carcinomas in the United States. SRCC has increased in 10-folds in the last 4 decades. It is known to have a genetic component, often prevalent in Asians with a classical presentation in the 5th to 6th decades of life. We present a case of SRCC and Lynch syndrome in a Hispanic young male patient with an advanced SRCC of the stomach.

Case Description/Methods: 32-year-old Hispanic with no past medical history presented with dyspnea without chest pain for 1 month along with weight loss of 20lbs and melena. Laboratory analysis revealed Hgb 5.5 gr/dl along with a low MCV (60 fL), and ferritin (6 ng/mL). The patient has transfused 3 units of packed red blood cells and started on iron supplementation. Upper endoscopy revealed a 10 cm partially obstructive ulcerated mass at the gastric body and lesser curvature (Figure 1a). Endoscopic ultrasound characterized the lesion showing an oozing ulcerated mass on the posterior wall with multiple large lymph nodes. Computerized tomography was done and TNM staging of the tumor was T4N3aMx. Biopsy showed invasive poorly differentiated adenocarcinoma with signet ring cells, positive for H. pylori (HP). MSH2 and MSH6 mutations were noted (Figure 1b, c-f). A total gastrectomy with Roux-en-Y esophagojejunostomy was performed, along with neoadjuvant chemotherapy. The patient was discharged with outpatient follow-up.

Discussion: SRCC is found in 8% to 30% of gastric cancers. Furthermore, it tends to be predominantly in females rather than males, unlike other non-SRCC. It has previously been established in Asians with an incidence of 30% with added heterogeneous distribution among African Americans, and Hispanics. MSH2 and MSH6 positivity correlate with Lynch syndrome; an autosomal dominant disease with a low risk for gastric cancer of 13%, and < 3%; respectively. CDH1 germline mutations are strongly associated with SRCC, with a cumulative lifetime genetic penetrance in males of 70%. Some trials support prophylactic gastrectomy in these patients along with genetic counseling. Recognition of HP infection and autoimmune diseases would indicate those at higher risk for endoscopic surveillance. Our patient did not have a family history of any cancer with no risk factor except for HP infection. MSH2 and MSH6 positivity suggest Lynch syndrome. Colonoscopy was negative. He was referred for genetic counseling and CDH1 testing. 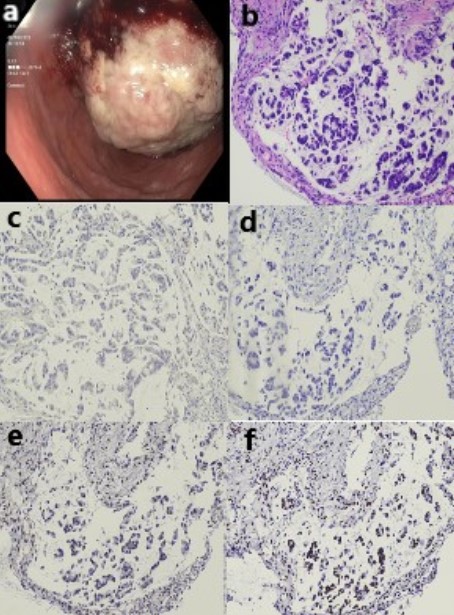